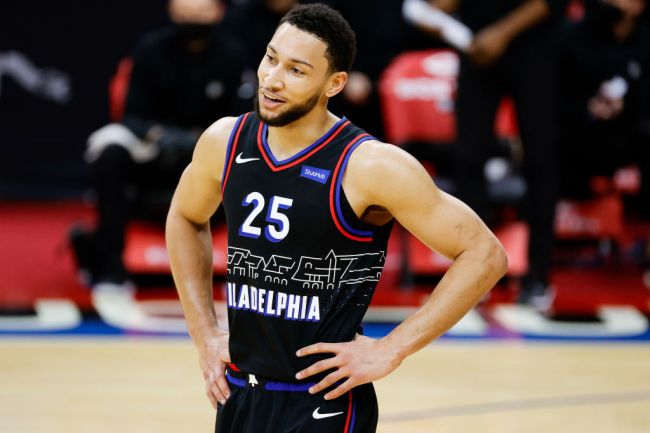 Ben Simmons is going through it. The 24-year-old NBA point guard had a brutal postseason and was made the scapegoat for Philadelphia. His coach threw him under the bus, his teammates questioned his cognitive abilities, fans are burning his jersey and he’s getting roasted online.

Simmons had an undeniably large role in his team’s exit from the playoffs, but irreparable damage has been done. It is very hard to see how the relationship between Simmons and Philadelphia could be repaired. Thus, he will be at the center of every trade rumor this summer.

In the meantime, Simmons can not be bothered.

He was spotted on Tuesday hanging out with his girlfriend Maya Jama in London. The two were out at Sexy Fish, an Asian restaurant and bar in Mayfair.

While seeing Simmons and his beau grab a meal might seem insignificant, it speaks to the Australia-native’s desire to focus on himself.

Take care of your mentals.

Amid a barrage of criticism after the 76ers’ early exit, Simmons said he needed to “clear my mind and get my mental (health) right.”

He left the U.S., got away from all of the constant media coverage and got some handrolls with his girlfriend. Good for him.

Meanwhile, earlier in the day, news broke that Simmons will not be participating in the upcoming Olympic games. It was a big blow to Australia, who have medal hopes, but head coach Brian Goorjian understood.

“It is a pretty rough time for him right now,” he said. Going to Tokyo “is something that he wanted to do, but the timing just hasn’t worked. The best thing for everybody right now is for him to go on and develop that skill package and improve in a couple of areas for his next season in the NBA.”

You have to appreciate Simmons for his recent happenings. People often forget that athletes are humans— and he is only 24. Simmons is taking care of himself, getting some time to be with someone who he is fond of, and getting his head right.

Other athletes might not handle the heat as well. Instead, Simmons is taking care of himself and focusing on what he needs to do to get his head right. Respect.