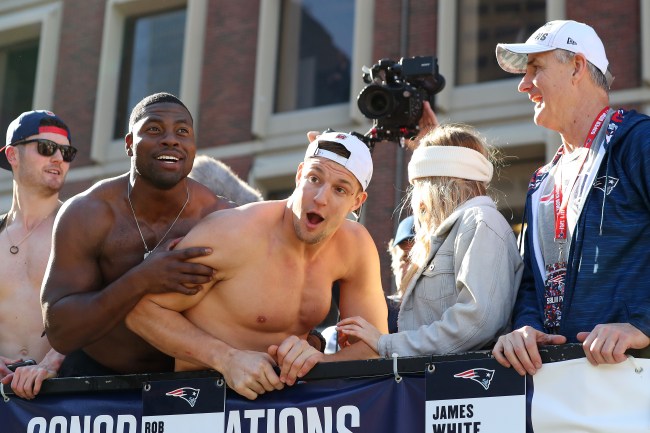 Much to the chagrin of 95% of the country, the city of Boston celebrated another championship on Tuesday. For perspective, a 22-year-old Bostonian has lived through 12 championships from the four major sports team in his lifetime. He simply knows no other way.

More than 1.5 million people gathered to watch the duck boats roll by, a crowd that Mayor Marty Walsh calls the “largest parade crowd in recent memory.” While many were “extremely well behaved,” according to police, twelve of the 1.5 million were arrested. Likely these dudes who brawled in the middle of the North End, likely over who’s the actor of out generation: Mark Walhberg or Casey Affleck.

There were thousands of signs made for the parade, some better than others, but we’ll let you decide their worth.

Let’s hear it for Alex! The @Patriots fan attends the University of Oregon. He’d like to apologize to his professor, but he says there’s no way he’d miss this. @NBC10Boston @necn pic.twitter.com/qXJaYzIYFY

Some creative signs out there for the #Patriots parade! Live WBZ-TV coverage her… https://t.co/xRYxGlqwxH pic.twitter.com/7HVkbRH1RO

One of the many head-turning signs at the Super Bowl parade #7News pic.twitter.com/kNpPOTweqd

A 12 pack … of parades. pic.twitter.com/uyhYPSbbe1

Great sign in the crowd of today’s parade. All of the quarterbacks selected before Tom Brady was drafted in the sixth round. #PatriotsParade #WBZ pic.twitter.com/ZLaMJCFTv6