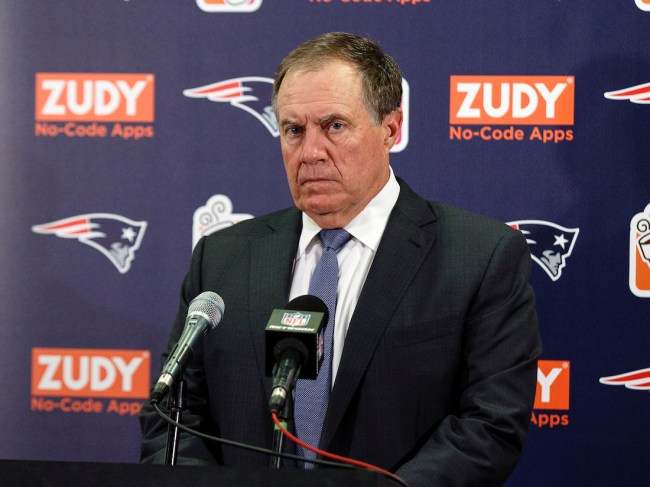 Remember that tension between Bill Belichick and the New England Patriots that came to a head during the 2017 NFL season? To refresh your memory, it involved the head coach trying to stand his ground and retain quarterback Jimmy Garoppolo, while trying to fade out the GOAT, Tom Brady. It didn’t work, as Garroppolo was traded to the San Francisco 49ers during that ’17 season, while Brady went on to lead the Pats to two more Super Bowl appearances, winning one.

All is forgotten about that situation now — given the fact that Brady just won his seventh career Super Bowl and Bill Belichick is trying to fill the void left by the future Hall of Famer after the 2019 season — but there’s always more juicy details to a good story. Well, the ESPN reporter who initially wrote about the apparent strained relationship between head coach, player and front office, Seth Wickersham, is adding a little bit more to the narrative.

Wickersham recently spoke about the Belichick-Brady situation, and didn’t mince words when describing how serious it was to coming to a surprising end. In fact, the ESPN reporter claims Belichick was so frustrated that he nearly left the New England Patriots following the 2017 NFL season, even talking to three other teams about coaching gigs.

According to ESPN's @SethWickersham, in 2018, following Tom Brady's MVP season in 2017 which led to the JG trade, the standoff between Brady and Belichick led Bill to talk to the #Giants, Washington and the #Dolphins about coaching there [@harrisonvapnek]pic.twitter.com/ETLyLjmGSI

If all of this is true, it’s another fascinating wrinkle in the Belichick-Brady relationship. Like, there’s always been the question whether it was the head coach or the player who’s responsible for such prolonged accomplishments, with the two winning six Super Bowls on the Patriots together. Ego gets in the way when that type of success occurs — especially in all-time greats like these two.

But would Bill Belichick had really just up and left New England because the front office wanted to keep Brady and not Jimmy Garoppolo? It’s hard to imagine that happening. Add in the fact that Seth Wickersham mentions the Giants, Dolphins and the Washington Football Team as the three potential landing spots for the greatest coach of all-time, and this all sounds a little bit unbelievable. Then again, who knows where Belichick’s head was at during the 2018 offseason, and how fumed he was about not keeping his guy, Jimmy G?

Now that Tom Brady’s gone and Belichick’s slowly working towards finding his next franchise quarterback, things seem to be OK in New England again. But that doesn’t mean the drama surrounding his former signal-caller doesn’t still cast a huge dark cloud over the organization, with this recent news being the latest report showing just how dysfunctional things actually might have been during all that winning the Patriots were doing a few years ago.