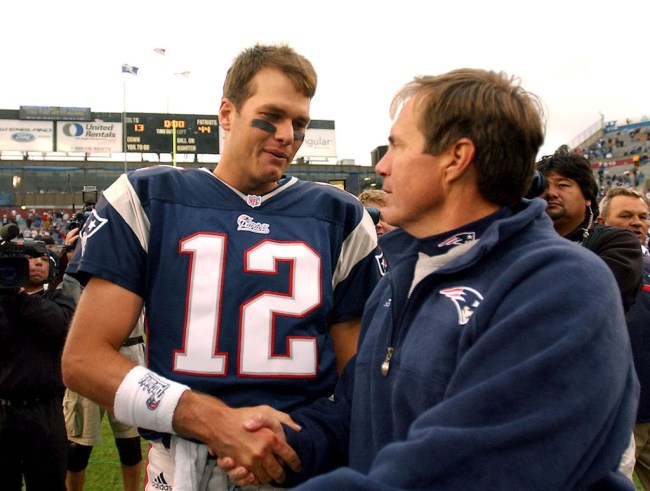 When you think of Bill Belichick, the word “paranoid” probably doesn’t often come to mind. After all, this is a guy who’s, arguably, the best head coach in NFL history, and has led his New England Patriots to nine Super Bowl appearances and six titles over the past 20 seasons, cementing his legacy as one of the greatest football minds ever seen. To put it bluntly, Belichick has outsmarted the entire league over the past two decades.

But the guy wasn’t always the person we know him as today. Yes, believe it or not, there was a time when Bill Belichick was just another failed head coach looking to prove himself during his second opportunity leading a team.

We all know the story of how Belichick ended up with the Patriots before the 2000 NFL season — abruptly leaving the New York Jets with a resignation note on a napkin — but many of us might not remember what happened after he joined New England. In a few words: Lots of losing.

Prior to the Patriots-Jets Monday Night Football game this week, ESPN published an in-depth article about Belichick’s first couple of years in Foxborough, and talked to some of the players, coaches and personnel around the Patriots during the 2000 and 2001 seasons. It’s wild to see how the guy has changed, with one story especially standing out.

According to then Jets special-teams coach Mike Westhoff, he was standing next to Bill Belichick and then Jets head coach Herman Edwards on the field prior to the first game since the September 11 attacks just a few weeks prior. Here’s what Westhoff said he remembered from that conversation.

“I’m walking out on the field and Belichick is walking out with Herman, and they’re talking. He’s standing right next to me, and Herman said, ‘How ya doing?’ Bill said, ‘We’re horrible, we f—ing stink.’

“He said, ‘The quarterback [Drew Bledsoe], I don’t know [about him].’ They lost their opener to Cincinnati and I’ll tell you his exact quote. Belichick said, ‘I’m not going to make it through the year. He’ll f—ing fire me before the year is over.’ That’s what I heard.”

Fast-forward literally a couple hours later and, with a simple twist of luck, some unknown backup quarterback named Tom Brady came in to replace Drew Bledsoe, ultimately guiding the Patriots to a Super Bowl title that 2001 season — and five more championships until his final season in New England in 2019. Pretty incredible.

The rest of the ESPN article is a must-read, with some of the former players describing the culture Bill Belichick built between the 2000 and 2001 seasons, and how Brady was a workaholic who would need to be reminded to leave the practice field because there were team meetings to attend. That type of work ethic wasn’t lost on his teammates, though, with former Patriot great Ty Law even admitting he gambled on Brady by selling him a house under market value because he knew the quarterback was going to get his chance at some point.

Ty Law: “It was his second year and I sold Tom my condo. Had to help a Michigan guy, so I left all the stuff in there, the TV, everything. I didn’t take nothing but my clothes. I left him couches, pool tables, beds. I said, ‘Just bring yourself’ because he wasn’t making any money. I gave myself a beating, it was $125 grand less than what I could have got for it on the market. The basement was finished. I had just got the big contract. But I saw how hard this guy works.”

The Belichick-Brady dynasty will be remembered as one of the best in sports history. While it’s ended and fans can look back at what they accomplished together, it’s always fun to hear where they both started from — and how far they’ve come in the past 20 years.