Fans React After Blake Snell Pulled From Another No-Hitter 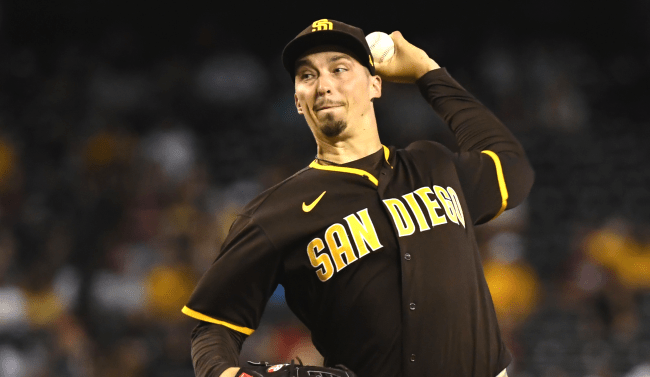 In a bit of a surprising move, 2018 Cy Young Award winner Blake Snell was pulled from the game with a no-hitter going after 7 innings on Tuesday. He says he agreed with the decision, but the fans? Not so much.

Much like in the sixth inning of Game 6 of the 2020 World Series, Blake Snell was absolutely filthy Tuesday night. He had shut down the Arizona Diamonbacks through 7 innings, allowing no hits, no runs, just two walks and had struck out 10.

Then, just like in the sixth inning of Game 6 of the 2020 World Series, Snell was pulled from the game.

Snell’s reaction this time, however, was much different than it was last October.

This time, Snell says he was on board with the decision to come out of the game, despite the fact that he had a very rare no-hitter going.

“I think honestly we were all in agreement 107 pitches, 122 was the most I’ve thrown in my career last game, it’s just, what, two more innings to go? I’m probably averaging, what, maybe 16, 17 pitches in innings. Do I really want to throw 140 pitches when I’m going to more needed the rest of this month?

“Instead of going 140 and then having to probably skip a start or something like that. I just think it was, I just need to be better. I need to be more efficient.”

He continued, “Like, I want to get a no-hitter, want to get a perfect game,” but since this wasn’t an all-or-nothing game like at the end of the season, he understood the decision.

After the game, Snell’s manager Jayce Tingler said, “It’s the last thing you want to do. The reality is he’s coming off his career-high in pitches, his career high in innings, he’s on a great roll right now, and it’s 107 pitches.”

Many baseball fans weren’t so understanding.

He's coming off a career high in pitches because you unnecessarily left him in to pitch against the Dodgers in the 8th! With that decision Tingler cost us that game and this game's probable no-hitter.

Is Blake Snell made out of paper mache? Let him pitch til he gives up a hit, then take him out! #managing101 #Nonohitter https://t.co/Wo7itl9zWC

If I'm Blake Snell you'd have to drag me off the mound! Nails we need more of that 🙏

We’re old. I’ve given up, the millennials have taken over. RT @jakequery: Padres just pulled Blake Snell (107 pitches) with a no hitter through 7.
Come on.

Oh, in case you were wondering, the Diamondbacks ended up getting three hits, one in the eighth inning off Pierce Johnson and two more in the ninth off Mark Melancon.

On the plus side, the Padres did end up winning 3-0 and Snell lowered his career ERA against the Diamondbacks to a minuscule 0.61 (over 29-2/3 innings).