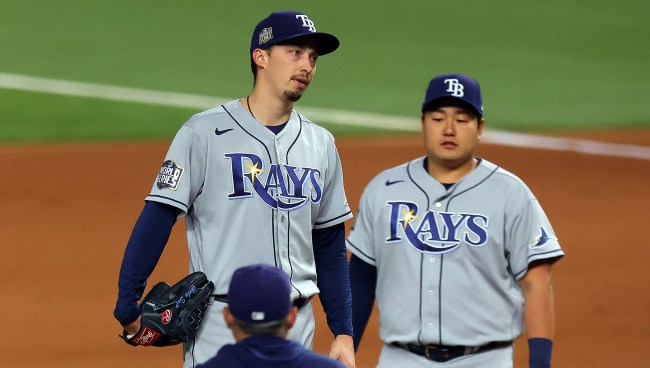 Someone once said, “The definition of insanity is doing the same thing over and over again, but expecting different results.”

Tampa Bay Rays manager Kevin Cash, who, mind you, won the American League Manager of the Year Award this week, says, even with hindsight and comments from Dodgers hitters and coaches, that he would remove 2018 Cy Young Award winner Blake Snell from Game 6 of the World Series with his team down 3 games to 2 after Snell had struck out nine batters (with zero walks) in 5-1/3 innings and was about to face four hitters who were a combined 0-for-8 with 7 strikeouts against him in the game.

“I would make the same decision again,” Cash said on SportsCenter on Tuesday. “Just hope for a much better outcome. And that’s being so respectful of everybody’s opinion that’s out there. But that’s what we do. We pride ourselves on getting the most favorable matchups possible, and in that moment thought that was the best matchup. They don’t always work, and certainly that one didn’t, but I think we have to stick to our thoughts, the information that is provided, and do what is best to help the team win.”

Sooo, Cash would decide to pull Snell, knowing that reliever Nick Anderson would give up the winning run, even if he had to do it all over again?

Just once, wouldn’t it be fun to hear a coach or manager just admit they screwed up and made a bad decision that potentially cost his team a title?

That’s definitely not happening with Cash, so don’t hold your breath waiting, as he also told The Athletic pretty much the same thing.

“I accept (what happened),” said Cash. “I would do it the same way all over again. I’d plead for a different outcome, that’s for sure. That decision was not reflective of my confidence in Blake. It was very reflective of my confidence in Nick. I thought our best chance to win the game was get the ball in Nick’s hands and line up our bullpen. … There is nothing simple about any of these decisions. We have talked in countless conversations of what we think is the best decision to help us win games on a nightly basis. There’s many things that (go) into those decisions.”

At least on the surface, Rays general manager Erik Neander has Cash’s back, saying, “I applaud (Cash) for staying consistent with his processes throughout. We don’t make it to Game 6 and play 20 postseason games without that.”

That, much like Cash’s decision to remove Snell from Game 6, is certainly debatable.