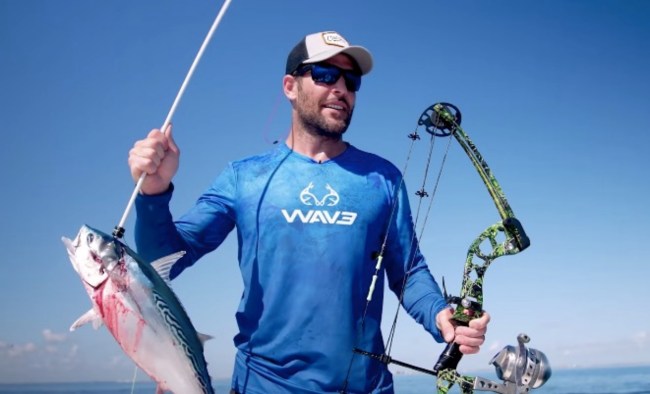 Catching bonito is always fun. They are a member of the tuna family but you’d be hard-pressed to find someone who actually calls them a ‘tuna’. Throughout parts of the USA, they’re also known as False Albacore.

If the species name doesn’t quite ring a bell you might recall them from Step Brothers when Derek (Adam Scott) brags about catching these ‘big’ fish ‘down in the Gulf’. Derek refers to them as a ‘trophy fish’ which to avid fishermen they really aren’t, but that doesn’t mean they aren’t a fun species to catch because they fight like hell and they make great bait for larger fish.

Here, Josh from BlacktipH on YouTube teams up with Mike and Bud Fisher to go bow fishing for bonito. They dump $400 worth of chum in the water in an effort to attract these fish close to the boat so they can shoot them with a bow-and-arrow.

The chum works. The fish show up. But it also draws in A LOT of hungry sharks who are swarming around the boat and looking for an easy meal. As you’ll see early on, pretty much anytime an arrow enters the water a shark makes a direct line for it, thinking there’s an easy meal on the horizon.

According to the video’s description, there were ‘hundreds’ of Bonito underneath the boat which has me wondering how many sharks were down there that we couldn’t even see. Check out this wild bow fishing footage where they try and shoot these fish that are moving 30mph through the water and turning on a dime.

Kind of makes me want to invest in a powerful bow. This is infinitely cooler than bow fishing for Alligator Gar (or gators) in ponds and rivers and much more challenging.

Looking for more awesome fishing content to take you through the day? Check out this 14-foot, 700-pound alligator that was caught in Georgia and set a new state record. Here’s a Lake Trout with 2 HEADS that was caught in upstate New York recently. A 1,000-pound hammerhead shark eating a Tarpon in Florida a few weeks back.

Still looking for some more? This bald eagle dragging a massive fish out of the water is Metal AF. Strongmen square off against Goliath Grouper. Also, check out this 757-pound swordfish that took 8-hours to catch.