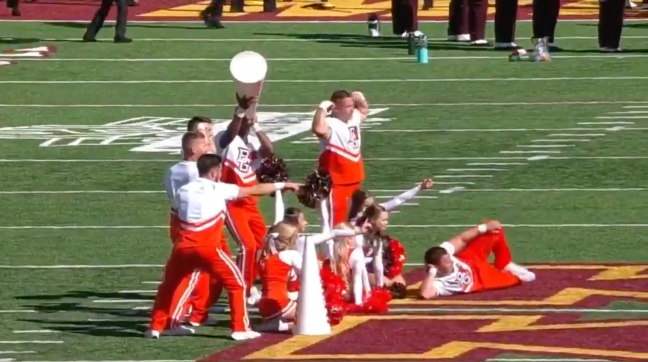 Bowling Green was 31.5-point underdogs at the University of Minnesota on Saturday. The Falcons entered the game 1-2 with a blowout loss to Tennessee and a three-point loss to South Alabama.

There was simply no reason that they should have been in the game against the Golden Gophers. Especially on the road.

And yet, behind only two touchdowns, Bowling Green pulled the upset and defeated Minnesota 14-10. Biiiiiiiiiig yikes.

The Falcons totaled just 192 yards on the day, converted only three of 14 third down attempts… and WON THE GAME!

To make things even funnier, look at how this game ended. It started with this absurd punt:

BGSU gets this ball they win the game. And so here's what happened: pic.twitter.com/hE5dLO45Kq

Minnesota proceeded to throw an interception after the chaotic , but Bowling Green couldn’t get a first down so the Gophers got the ball back. And then they threw another interception to lose.

I take it back – THIS pick ended it pic.twitter.com/79pAIvzQ16

For such an embarrassing loss to go down how it did is going to be a very tough pill to swallow for those in Minneapolis. Even though they are playing without their star running back, it really couldn’t have gone any worse.

After the game, the Falcons cheer squad danced on the grave of the Gophers by flexing all over the midfield logo.

The cheer squad is flexing on the logo? 🤦‍♂️ pic.twitter.com/0DMlRFjUyf

College football is the gift that keeps on giving and Bowling Green, Ohio is about to go wild.

Can one even go crazy in Bowling Green, Ohio? Is that a thing?