Brandon Jacobs Claims At Least Three NFL Teams Are Interested In Signing Him, A Former RB, As A DE 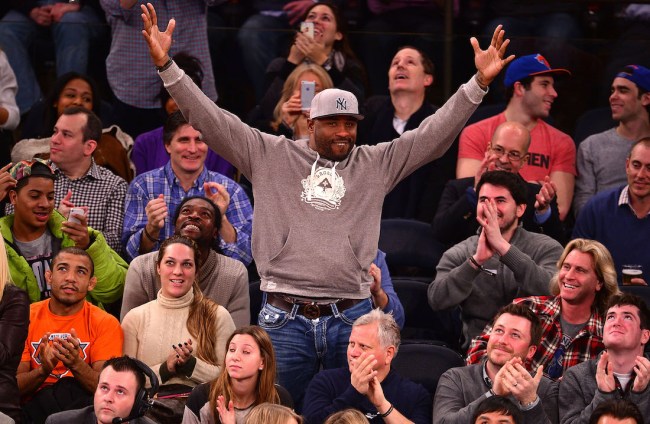 When Brandon Jacobs was playing for the New York Giants, the bullish running back blended physicality with deceptive speed, which was a scary sight for defenders. Listed at 6’4″ and weighing over 260 pounds, Jacobs didn’t exactly fit the usual mold for a runner. Yet, even with his size, he was still productive as an every down back.

Seeking contact as a ball carrier seemed natural for Jacobs given his size. But the former Giants great revealed in May that he was looking to hit people more often, and tweeted his interest in making an NFL comeback as a defensive end after seeing Tim Tebow join the Jacksonville Jaguars. The former quarterback is hoping to convert to a tight end this NFL offseason.

Well since Tebow came back after being off a good bit, I am announcing today that I to will comeback. I will play defensive end for whatever team gives me a chance!!!

I am really serious about coming back as a defensive end. I can still run, I am strong and there’s no way Tim Tebow is a better athlete than I am. I just need a shot that’s it!! If I can’t cut it I’ll take it like a man. Just give me one chance that’s all!!

I love this society we live in!! 😁😁 I thought this was America where people shoot for what they wanna do.

While Brandon Jacobs’ NFL comeback seems ambitious — especially since the former running back’s 38 years old now and hasn’t played in the league since 2013 — it might actually be more of a reality than any of us think. That’s because, according to Jacobs, at least three teams have shown interest.

“I think my ability as a defensive end, as an old man as they regard me, I think I can be one of the best in the league right now,” said Jacobs, who was inducted into the Terrebonne General Bayou Region Athletic Hall of Fame on Thursday at Cypress Columns in Gray.

“I don’t want to throw names out there just yet because I was told not to, but it’ll be a shock,” Jacobs said. “If I don’t get an opportunity, it’s fine. I’m currently coaching high school football and running a youth program, which I’m perfectly content with doing the rest of my life.”

Solid PR move by Jacobs to withhold info and keep the alleged teams private. While the news should be taken at face value, who knows if he and his agent are just going the whole “anonymous” route just to generate interest from teams. Either way, we’ll have to wait and see if any NFL team comes calling.

Brandon Jacobs might hope to make an NFL comeback like Tim Tebow has with the Jags, but early indications appear to be that the former Heisman Trophy winner isn’t impressing much with his new team. Maybe Jacobs has better luck should he get his shot.