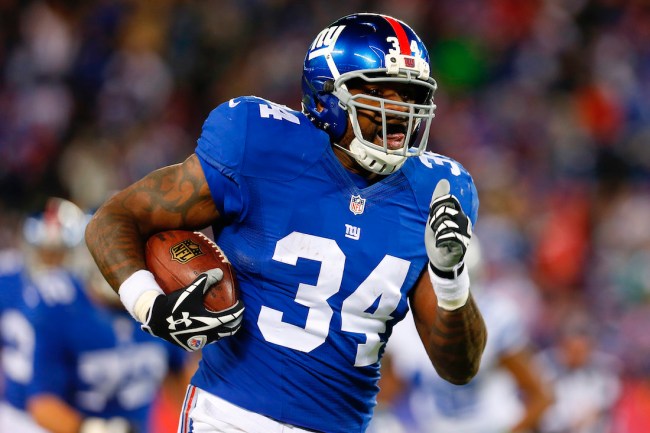 Remember when Brandon Jacobs was bullying defenders as a beastly running back for the New York Giants? Standing 6’4″ and weighing over 260 pounds, there wasn’t much anybody could do when the guy had a head full of steam and was plowing down the field with his deceptive speed. Mix that with his strength and, well, it’s no wonder Jacobs ended his career as the Giants’ all-time leader in rushing touchdowns.

After calling it quits from the NFL in 2013 after a subpar final year with the G-Men, Jacobs now has the itch to return to the league — but as a defensive end rather than as a running back. No, this isn’t a joke.

Following the news that Tim Tebow signed with the Jacksonville Jaguars this NFL offseason to tryout as a tight end, Brandon Jacobs hopes he can do something similar, saying on Twitter that he’s “serious” about his comeback bid with a team prior to next season. Here’s what the former running back had to share on social media over the past few days about the idea.

Well since Tebow came back after being off a good bit, I am announcing today that I to will comeback. I will play defensive end for whatever team gives me a chance!!!

I am really serious about coming back as a defensive end. I can still run, I am strong and there’s no way Tim Tebow is a better athlete than I am. I just need a shot that’s it!! If I can’t cut it I’ll take it like a man. Just give me one chance that’s all!!

I love this society we live in!! 😁😁 I thought this was America where people shoot for what they wanna do.

Lol this would be sweet but lasting that long would be a no go lol https://t.co/JpKHcaMhW4

I don’t think I can give up all this good food. I don’t know about this comeback lol. I can’t eat chitterlings, man I’d die for those.

It’s a little absurd to imagine Brandon Jacobs coming back to the NFL at age 38. It’s even crazier to think the former New York Giants star could make the switch to defensive end, actually get a tryout and, wildly, show enough to convince a team to sign him this NFL offseason. Then again, three months ago Tim Tebow playing in the NFL again — as a tight end, no less — wasn’t exactly something many had on their radar. So, who knows? Maybe Jacobs gets a legit shot at returning.

Despite all the criticism Tebow’s return has caused amongst fans, players and, reportedly, some leadership in the Jaguars’ organization, it seems like the former Heisman Trophy winner’s leadership and influence is already having a trickle effect on other guys. And not just the ones inside the Jags’ locker room — although rookie quarterback Trevor Lawrence has raved about being around Tebow so far.

Nobody knows what might happen with Tebow, this pipe dream of Jacobs’, or any other old-ass former player hoping for a comeback this NFL offseason. It’s cool to see these guys longing for another chance in the league, but, let’s be honest, at their ages and inexperience at their hopeful positions, the roster spot is better served for a younger player trying to prove himself.