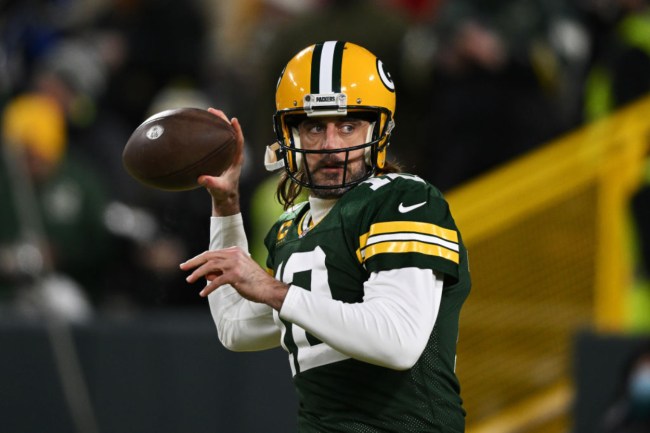 Aaron Rodgers confirmed that all options are on the table when it comes to his decision regarding his future. Rodgers could return to Green Bay and play at least another season, he could retire, or he could force his way onto a new team.

While Rodgers made it clear that he’s not all that close to making up his mind, that leaves the rest of us playing the guessing game.

We’re heading into conference championship Sunday in the NFL, but Rodgers continues to dominate headlines as everyone seems to have thoughts and opinions about the Green Bay QB and his future.

Brett Favre knows a thing or two about playing QB for the Packers, so his insight should count a bit more than most people’s out there. He was asked to share his opinion on the situation at hand and offered up his prediction in the process.

“Had he won the Super Bowl, I think he leaves or doesn’t play, but that’s not the case. I think that there’s still unfinished work left for him in Green Bay, and that’s to win a Super Bowl and again, I think his best chance to win one.”

This is interesting given the fact that earlier in the week Favre said his gut feeling was that Rodgers would decide to leave Green Bay.

"I think that there is still unfinished work left for him in Green Bay, and that is to win a Super Bowl."

Favre’s prediction of Rodgers not retiring makes sense. It’s tough to imagine him hanging up the cleats after such a deflating loss to San Francisco.

While Favre saying that Green Bay is Rodgers’ best bet to win another Super Bowl isn’t surprising given his ties to the organization, it’s certainly up for debate.

“[Aaron Rodgers] best chance to win is right there [in Green Bay],” Favre also added. “They had it just like they wanted it really two years in a row and there is no reason to think that they’re not going to be any better. Barring injuries, they’re a good team.”

Many are pointing to the Denver Broncos as the best fit for Rodgers. Denver has weapons, can create ample amounts of cap space to bring in more pieces for Rodgers, and is a team that looks to be a step or two away from doing something special.

Favre thinking that Green Bay is the best place for Rodgers to essentially end his career is the same opinion Eli Manning shares.