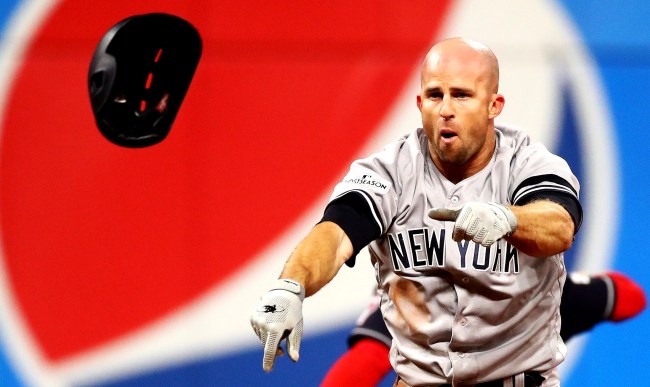 New York Yankees outfielder Brett Gardner has filed a restraining order against an obsessed female fan who is suing him, claiming she is his “future wife” and that he sends her sexual “signals” from the playing field.

Is that why he is always tearing up the dugout roof with his baseball bat?

Guess not since Gardner and this woman have never actually met.

And here the Houston Astros’ players thought they were having problems with fans.

The 36-year-old outfielder got an order of protection against Gina Devasahayam in Bronx civil court last week after the 46-year-old fan filed a lawsuit against him.

Devasahayam, who claims to be the founder and CEO of a biotechnology company, was kicked out of Camden Yards in Baltimore last August for trying to sneak into the visitors’ clubhouse, and was removed from Yankee Stadium in October.

Outside Yankees Stadium at the Bronx, I will go to Bronx Court tomorrow regarding the MLB letter against me @Yankees @MLB I wish you victory this postseason pic.twitter.com/K7OGSjmwq4

I have never seen you angry at me Gardy, I will claim you play the role of my husband, that is my first right, my second right is to allow me inside the Stadium

She also states in the lawsuit that Gardner “motions with his hip on the stairs [of the dugout] as though he is having sexual intercourse with me,” makes “a sad face” during home games when she does not attend, and that the Yankees have hacked into her Twitter account to steal her intellectual property.

Congrats Gardy on your renewed deal with @Yankees I look forward to seeing you soon! ❤️⚾️💋

Devasahayam’s lawsuit, which also names the Yankees and Major League Baseball as defendants, states that the league is portraying her as a “deranged rambling woman on the loose.”

In an interview with NJ Advance, Devasahayam said that the fact that Gardner is married is “not of importance.”

Security personnel at George M. Steinbrenner Field, home of Yankees’ Spring Training, have been given her photo with orders not to allow her entrance into the complex.

The woman is truly frightening.

Thank you for your homerun Gardy! ⚾️💋

I will watch your game from local Irish sportsbar in DC area, Brian I noticed your signals in Texas, I look forward to your free ticket @Yankees

The Gardy animal is fixated that I am sitting near first base! I am still asking your ticketing for a seat for your postseason at Yankee stadium…

Our romance is working wonders for both of us @Yankees 26th homerun, the best season ever! 💓🎉

Ejected again by @MLB for #LetBrettBang because they don't want you to bang me in the dugout while I am dominating play…you can't do that, you have to marry me Gardy @Yankees

You are a fascinating beast Gardy, you cry like a baby and then you push me and want to f*** me…

For you Gardy, at the cathedral…when are we marrying? @Yankees pic.twitter.com/eCYDTcn5Ew