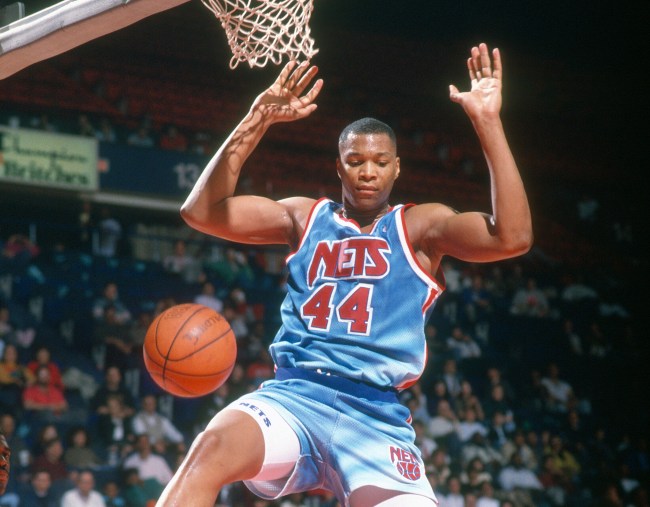 The Brooklyn Nets may be looking to its future after signing All-Stars Kevin Durant and Kyrie Irving last offseason and naming former two-time league MVP Steve Nash their head coach, but the franchise is paying a little homage to its past with some updated “City Edition” uniforms that are absolutely fire. And, for anybody old enough to remember the 1990-91 New Jersey Nets — you know, before the team moved across the bridge and into Brooklyn — you’re going to be mighty happy, because the old school design is officially back!

According to the team’s official social media accounts, the Nets are bringing back that incredible tie-dye style pattern that was so iconic 30 years ago, with Irving showing off the updated look. Man, what a lethal pattern.

The jerseys are filthy, but just look at the edit work on the video release showcasing the new look, which mixes all-time great Nets players like Derrick Coleman and Kenny Anderson with some of today’s faces of the franchise.

After dropping some of the images, the Brooklyn Nets made the following announcement on its website about the new design, which also includes warm ups and t-shirts.

“For next season the Brooklyn Nets are bringing back a fan favorite, one of the most-talked-about jerseys in NBA history, with their first Classic Edition uniform”, the Nets wrote on the uniform launch site. “Thirty years ago, the Nets launched the 1990s with an aesthetic reset, introducing a new logo and new uniforms. The piece that grabbed everybody’s attention was the new road set, a washed-out, sky blue-to-white gradient that looked like nothing the league had seen before. It has gone down in NBA history as the ‘tie-dye’ jersey.”

Given the fact that everybody pretty much loved these old school Nets uniforms, it’s only natural that people on Twitter had nothing but positive reactions. Take a look at some of what the people were saying on social media.

People outside the Tri-State Area might not realize how big of a deal this is. A lot of New Jersey-based fans have harbored resentment for the Nets crossing the bridge without much sympathy. Having The Meadowlands featured here is a nice touch. https://t.co/X5vdpw5My9

First thing I thought of 💔

The light blue with the red ! Oh my goodness pic.twitter.com/ua7MOrF0fl

The Brooklyn Nets overachieved during the 2019-20 NBA season with Durant out and without Irving playing a big role, and with sights on a championship come next season, let’s all hope the team does a little bit better than that 1990-91 team did when they first wore these threads, because they went a paltry 26-56. But here’s to a new chapter in Nets history, because these are amazing to have back in the league.