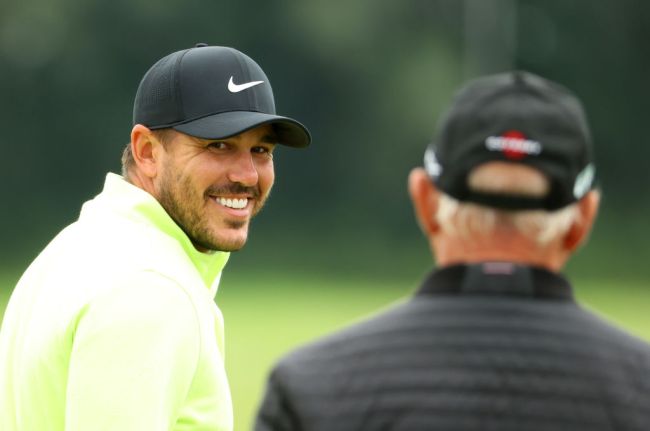 It was a guarantee that Brooks Koepka was going to take some sort of dig at Bryson DeChambeau after DeChambeau said his driver “sucks” after the first round of The Open Championship. Koepka’s dig came Friday afternoon after his second round 66.

Following his round, Golf Channel’s Todd Lewis asked Koepka if he was able to be a bit more aggressive given the weather and lack of wind at Royal St. George’s on Friday. Koepka explained that he was before saying “I drove the ball great, love my driver.”

Koepka gave a bit of a smirk after he made the comment, but other than that he was all business.

The best part about Koepka’s comment about driving the ball great and loving his driver is that he hit just six of 14 fairways on Friday.

Koepka with the direct shot at Bryson.

“I drove the ball great, love my driver.” pic.twitter.com/SdDeEA74xQ

DeChambeau’s Issue With His Driver

Following his opening-round 71 on Thursday, DeChambeau said “the driver sucks” after hitting less than 30% of his fairways.

“If I can hit it down the middle of the fairway, that’s great, but with the driver right now, the driver sucks,” DeChambeau explained. “It’s not a good face for me, and we’re still trying to figure out how to make it good on the mis-hits. I’m living on the razor’s edge, like I’ve told people for a long time.”

Cobra, DeChambeau’s club sponsor, didn’t appreciate his comments too much and responded.

Ben Schomin, who not only is Cobra’s tour operations manager, but also the man that caddied for DeChambeau at the Rocket Mortage Classic two weeks ago, didn’t hold back in letting his thoughts about DeChambeau be heard.

“Everybody is bending over backwards. We’ve got multiple guys in R&D who are CAD’ing (compute-aided design) this and CAD-ing that, trying to get this and that into the pipeline faster. (Bryson) knows it,” Schomin said. “It’s just really, really painful when he says something that stupid.”

“He has never really been happy, ever. Like, it’s very rare where he’s happy,” Schomin said. “Now he’s in a place where he’s swinging a 5-degree driver with 200 mph of ball speed. Everybody is looking for a magic bullet. Well, the magic bullet becomes harder and harder to find the faster you swing and the lower your loft gets.”

As for Koepka’s dig at DeChambeau, this is just another chapter added to their ongoing rivalry.