Brooks Koepka Reminisces On Seeing Tiger As A 12-Year-Old, ‘It Was The Coolest Thing Ever’ 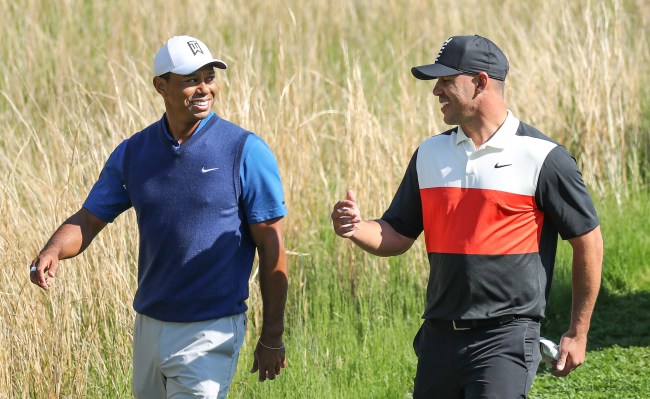 Brooks Koepka is getting set to tee it up for the first time since October at this week’s Abu Dhabi HSBC Championship after re-injuring his knee after a slip on some concrete. Ahead of the event, the No. 1 player in the world spoke with the media and told a pretty great story from his childhood.

Koepka’s family took a trip to the United Kingdom back in 2003 and made a stop at Royal St. George’s for The Open and he distinctly remembers one thing about the experience and that is seeing Tiger Woods.

Brooks’ brother, Chase, actually shouted at Woods and Koepka still very much remember that moment  saying ‘we thought it was the coolest thing ever.’

“I remember it was actually kind of funny, my brother shouted at Tiger and he shouted back at my brother, something like, ‘Thanks, Bud,’ or whatever it was,” Koepka told the media. “We thought it was the coolest thing ever. I was 12, maybe, something like that. It’s been a while since then. I mean, I don’t remember much of it. I just remember Ben won coming down the stretch there.”

Huge shoutout to fearless Chase for shouting at Woods as a kid.

The Ben that Koepka is referring to in the story is Ben Curtis, who went on to win that year’s Open at 1-under; Woods finished T-4 alongside Davis Love III two shots back.

It’s always cool to hear stories about today’s best players recalling childhood stories about Woods and other players that sat atop the game back in the day.

Related: Brooks Koepka Goes Into Detail About ‘Excruciating’ Knee Injury Suffered After Slipping On Concrete And It Sounds Brutal