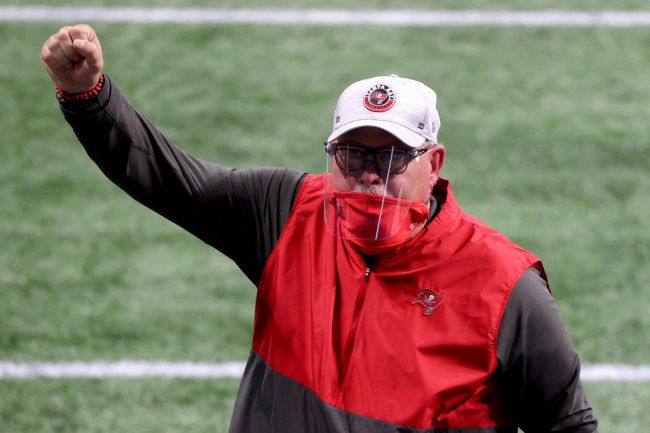 Bruce Arians, in a moment of unbridled confidence, made the courageous decision to hijack the head coaching responsibilities from Tom Brady and dictate some mandates of his own.

On the heels of Bucs fully-vaccinated kicker Ryan Succop testing positive for the virus after having dinner indoors with players from the Tennessee Titans, a team who currently has three players on the Reserve/COVID-19 list (not including coach Mike Vrabel), Bruce Arians announced in a presser Wednesday that his players are in for a very boring, militant season.

#Bucs HC Bruce Arians said today that he won't allow his players (vaccinated or not) to leave the team hotel on road trips. They will be under the same protocols as last year. “There’s league rules and then there’s my rules.” pic.twitter.com/qNc6ytmmmL

“For us, life is not normal,” Arians said Wednesday. “We’re pretty much under the same protocols — we’re going to be under the same protocols as last year. Because that’s the way it is, especially living here. Tennessee coming in and going out to dinner — they found out the hard way. So did Ryan. You can only tell them so much. Once we get to 53 — even this weekend — our guys are going to make a bunch of sacrifices that you have to make now. Families at the hotel, all those things — they’re all out the window.” [transcribed via ESPN]

As it stands today, the NFL allows vaccinated players “to leave the hotel to eat and/or use restaurants open to the public, subject to individual Club rules.” Only unvaccinated team members are prohibited from eating at restaurants on the road, according to ESPN.

Arians said previously that the Bucs roster would be 92% vaccinated by August 13th and “at least” 98% vaccinated by Week 1. The NFL “consequences” for vaccinated players who are either in close contact with a positive or test positive themselves are slim-to-none, so Arians iron fist is confusing.

Bucs coach Bruce Arians said he won’t allow players to leave the hotel on road trips even if vaccinated. “Vaccinated or not, they’re not going anywhere.”

Bucs coach Bruce Arians won't punish Antonio Brown or other players who got in fights on Thursday during practice with the Titans. https://t.co/2GgZAvPoji