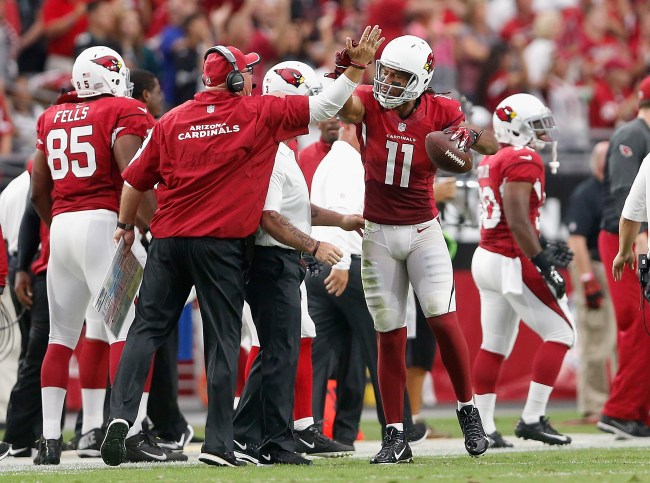 We don’t talk nearly enough about how nice of a man Larry Fitzgerald is. As a curator and purveyor of sports-related topics, I shoulder some of the blame for ignoring the admirable phenomenon that Larry Fitzgerald has been The NFL’s Nicest Man for 15 damn years.

The 2016 Walter Payton’s NFL Man of the Year has been lauded yet again for his character by Tampa Bay Buccaneers head coach Bruce Arians.

Arians, who coached Sticky Fingers for four years in Arizona, recently recalled a story that began with Fitzgerald injuring him in a post-game celebration after a game-winning field goal in Seattle on Christmas Eve 2016. Fitzgerald inadvertently tore his coach’s rotator cuff, requiring surgery and prohibiting him from playing any golf in the offseason.

After Arians had surgery in March 2017, he joked to Fitz that a get-well card wouldn’t be enough, it would take a “get-well convertible” to bury the hatchet.

“I kidded Larry all year never expecting it. It was just a joke,” Arians told Bickley & Marotta in 2018. “Drove home Christmas morning and my kids were out in the driveway with their cameras and, ‘What the hell is going on?’ And there’s a car with a big red bow on it from Larry.”

Fitzgerald hooked Arians and his family up with a brand new Mercedes-Benz convertible.

Keep in mind, we’re talking about a guy who’s ‘Philantrophy’ section on his Wikipedia page is almost as long as his football accolades. And he holds 24 NFL records and too many Cardinals franchise records for me to count at this time.

Now whose ass do I have to kiss to get Larry Fitzgerald to break my shoulder?