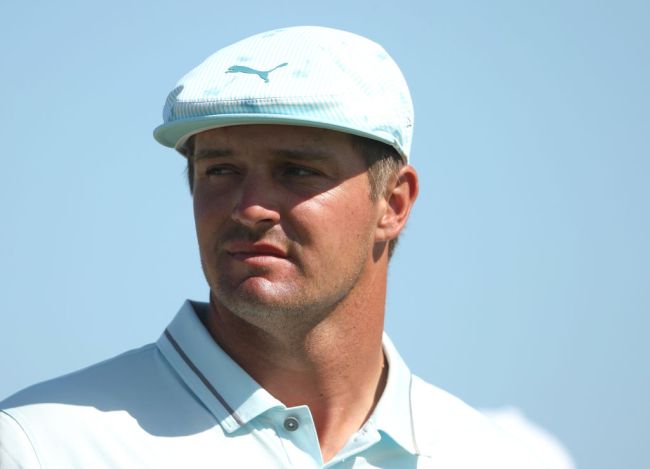 Brooks Koepka not being the biggest fan of Bryson DeChambeau is not new information, but a leaked video of a Koepka interview at the PGA Championship that went viral on Monday night shows just how much he can not stand DeChambeau.

In the unaired Golf Channel interview with Todd Lewis, Koepka begins explaining how tough it was to putt in the conditions during the second round. As Koepka is talking, DeChambeau walks directly behind him, which Koepka reacts to by closing his eyes in disgust multiple times and delivering some epic eye rolls.

Koepka takes a pause and says “I lost my train of thought hearing that bulls-it.”

It’s not entirely clear if DeChambeau actually said something before walking behind Koepka or that his presence alone sent him over the edge, but something clearly rubbed Koepka the wrong way.

Shortly after the leaked video hit Twitter, DeChambeau responded by posting a video of him lifting weights to his Instagram story. He also commented underneath the video itself.

The unaired Golf Channel interview with Koepka hit Twitter late Monday night and completely took off. The original video has racked up nearly 8 million views in just over 12 hours.

The history between DeChambeau and Koepka started at the 2019 Northern Trust Open when DeChambeau took over two minutes to hit an 8-foot putt in the tournament.

Koepka, who had been vocal about his frustrations with slow play, didn’t like it, and it was later reported that DeChambeau approached Koepka’s caddie at the event saying that if Koepka has a problem with his slow play, he should talk to him about it face-to-face.

Fast-forward a bit and Koepka essentially accused DeChambeau of using steroids in reference to his quick bulk-up after winning the 2020 Rocket Mortgage Classic. There was that whole incident with the ants in Memphis, too, which was hysterical.