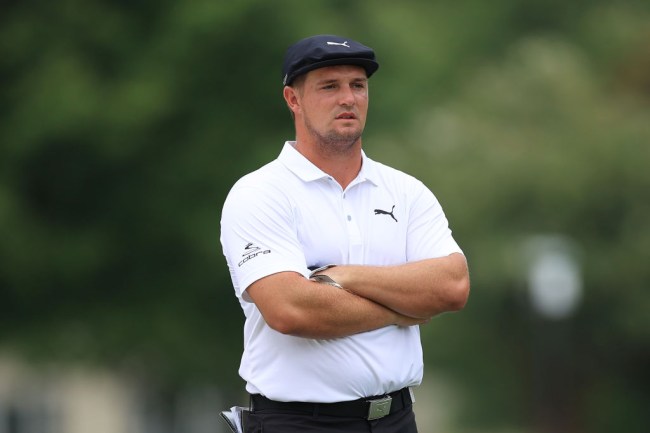 Bryson DeChambeau is a unique guy. He’s been a character ever since arriving on the PGA Tour with his Payne Stewart hats, his one-length irons, the discussions he has about physics, and now he’s turned into a human boulder changing the game of golf.

Each and every week this new-look Bryson has teed it up since the season resumed, something wild happens. Whether it’s him nearly driving multiple Par 4’s in a round, winning a tournament, or his caddie protecting him from cameras, he really has turned into appointment viewing because you don’t know what may happen next.

The trend continued this week in Memphis during, and after, DeChambeau’s opening round of the WGC-FedEx St. Jude Invitational.

The drama started on the Par 4 7th, his 16th hole of the day when he pulled his tee shot left near a tree. As he approached his ball, he claimed to have seen a few fire ants and holes in the ground and tried to claim it was some sort of burrowing animal in an attempt to get free relief from the spot. The rules official didn’t buy it.

The exchange between DeChambeau, the rules official, and a few ants was quite a moment but believe it or not, it wasn’t the most bizarre thing he did on Thursday afternoon, that came during his post-round presser.

A reporter asked him the simple question of what he was listening to when walking to the 10th tee, his first hole of the day, and DeChambeau explained that it was Kings of Leon. Everyone with good taste in music loves a bit of KOL, no biggie, but then the reporter asked which particular song he was listening to and that’s when all hell broke loose.

Instead of just being honest and saying he was listening to one of the band’s most popular songs, ‘Sex On Fire,’ the 26-year-old censored himself from saying the word ‘sex.’ Seriously, that is a thing that really did happen.

DeChambeau, like Reed, is a huge Kings of Leon fan.