Down By 10, Bucknell Somehow Scored 13 Points In The Final 50 Seconds To Come Back And WIN 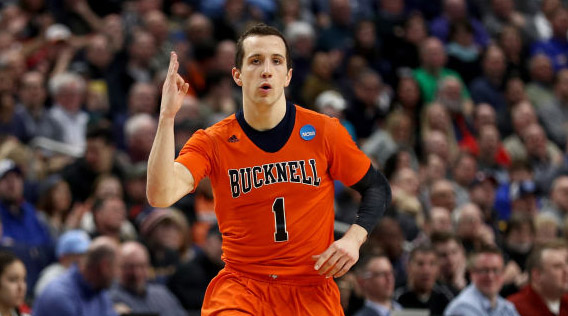 Remember when Reggie Miller scored eight points in 8.9 seconds to beat the New York Knicks in game one of the Eastern Conference semifinals back in 1995? This finish by Bucknell, who was down by 10 with 50 seconds to go is reminiscent of that insanity. Somehow, Bucknell managed to score 13 POINTS in less than a minute to come back and WIN the game. March Madness apparently came a month early.

During their 13 point outburst, which was also part of a 14-3 run, the Patriot League-leading Bison were still down by eight with 33 seconds left, but managed to score the next nine points after Colgate guard Sean O’Brien sank a free throw to make the score 64 to 56.

The miraculous run was capped off by Bucknell’s junior guard Kimbal Mackenzie nailing a three-pointer from the corner as time expired to give his team the 65 to 64 win.

Mackenzie ended up scoring six points, committing two fouls, and grabbing two offensive rebounds, all in the final minute of the game to help move the Bison to 12–2 in the Patriot League and move another game up in the standings over second place Colgate.

Check out the final 33 seconds of insanity below…

And just because I brought it up, just for fun, here’s Reggie putting a dagger in the Knicks’ hearts.