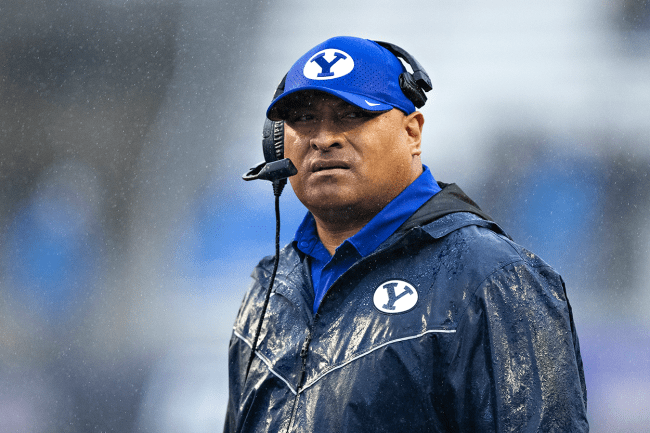 In the current era of Name, Image and Likeness and the transfer portal, college football looks different than it did even one year ago. Although money has always had a prominent role in recruiting and the sport as a whole, the market is inflated and deals are being made in the public eye.

There are undeniable kinks that need to be worked out with the current landscape of college football.

The bubble and value inflation will burst. The market curve will flatten out. New rules on the transfer portal and tampering will help to avoid some of the chaos.

While the issues are glaring, the problem with NIL is not the players getting paid. It is the first time ever that athletes are able to be compensated properly while bringing in millions of dollars in revenue to their respective schools.

He said that he doesn’t know if college students are “supposed” to have “that much” money in their bank accounts, which is completely subjective and outlandish. Sitake’s comments come as a bit of a joke, but it doesn’t change what he said.

Is NIL getting out of control in college football?@BYUfootball HC Kalani Sitake (@kalanifsitake) shared his thoughts on the changing landscape in collegiate sports with @KrisBudden & @GabeIkard on Big 12 Radio.#BYUFOOTBALL | #GoCougs pic.twitter.com/ZfjtIkpR9v

To some extent, Sitake the way in which he presented his comments was with a of tongue-in-cheek tone. And to some extent, he is right.

There needs to be an element of education. Athletes should be taught how to manage their money, invest and save. They should be focused on being the best player they can be while making money.

But, who is Sitake to say how much money a college athlete should or shouldn’t be making?

Is it crazy to imagine that a person who produces a product is getting compensated in return? Should players not be making as much money as possible in a free market society?

Of course, Kalani Sitake’s comments led him to being dragged online. College football fans proceeded to roast him for what he said.

CFB is in a weird spot right now. A lot of it is insanity, if we're being honest. Regulation (closing the portal) is needed.

But millionaire football coaches advocating for legal adults to have their earning potential capped is a joke. And nobody should listen.

lol ain’t no context that makes that statement ok

i dont know if people should have money they earned in their bank account either https://t.co/dhNG8cNH81

Part of the Honor Code is that you can only have $500 in your bank account at any given time, these are the rules https://t.co/dYIe8cLXCA

Y’all don’t tell him about the MLB Draft, he might have a stroke. https://t.co/DSzjVXJC85

19 year olds go to the NBA and make what? 18 mill? But he’s upset over majority of NIL deals barely hitting 6 figures https://t.co/PSDIhg3Inm

Unless it’s being tithed to the Mormon church right coach? https://t.co/ohjUMvNdGq

i mean, the man coaches at BYU. they don't even believe in 19-year-olds being allowed to consume coffee there. https://t.co/8uWBJ2ue8P

They’re not old enough to have that in their own account but they can make the university millions??🤔 https://t.co/KlfCaILaCK

But they’re old enough to take out $100k student loans

Guess what? Plenty of “adults” much older than that can’t handle money in their bank accounts either, but doesn’t mean they shouldn’t be able to receive fair wages! SMH.

Again, listening to the full context of the quote, there is a hint of sarcasm.

BYU has been “with it” in terms of NIL and a protein bar company is paying the tuition of every walk-on with the program. That’s all great and Sitake is fine with players receiving compensation. He isn’t arguing against NIL.

But, even in jest, to be commenting about what someone should or should not have in his or her bank account is wrong. Especially when you’re making in the ballpark of $1.5/2 million off of the players’ product. Not a great look.