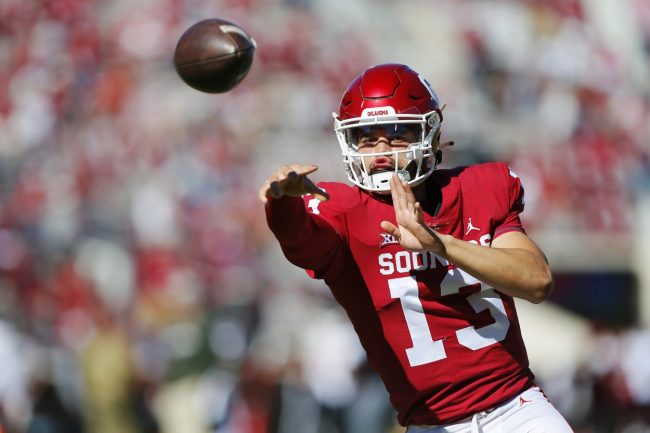 Less than a week after entering the transfer portal, former Oklahoma quarterback Caleb Williams’ recruitment is off to a fast start. As could be expected with a former five-star, potential Heisman Trophy candidate signal-caller, reports are all over the place.

When Williams first entered the transfer portal on January 3, 2022, the logical suitor appeared to be USC. Former Sooners head coach Lincoln Riley recruited the 6-foot-1, 210-pound rising sophomore out of high school and left to coach the Trojans.

Thus, it made a lot of sense for Williams to reunite with Riley to play at The Coliseum. However, a few other suitors quickly entered the picture.

Per multiple reports, Williams’ recruitment could send a ripple effect across college football. That belief stems from reports that his commitment will cost anywhere between $500,000 and $1 million in deals for NIL. After a belief that it leaned toward or greater than the seven-figure number, it appears to be closer to the $500k mark.

Among the potential suitors, Ole Miss, Georgia and USC appear to be the top-three. Lane Kiffin is personally handling Williams’ recruitment, the Bulldogs are playing in the national championship which is always enticing, and the Trojans have Riley.

In addition to the “core three,” Williams has received a $1 million offer from an unlikely destination. He has also been linked to Chip Kelly and UCLA.

And now, per the most recent report, the two Pac-12 rivals are gaining steam.

According to On3’s Scott Schrader, Williams is planning to head West and see what is going on in Los Angeles. Riley and Kelly have both been in touch with Williams recently, but the 20-year-old and his father would reportedly prefer to discuss his recruitment in person.

That obviously requires a trip to the west coast, which Schrader says could come as early as this weekend. While in Southern California, Williams and his dad will visit both USC and UCLA.

This does not mean that he is trending in that direction, but the wheels certainly may be in motion. Most schools have an academic add/drop date around the end of January, so Williams’ commitment will likely come within the next few weeks.

But first, he and his dad are going to visit the two crosstown rivals in Los Angeles and go from there.