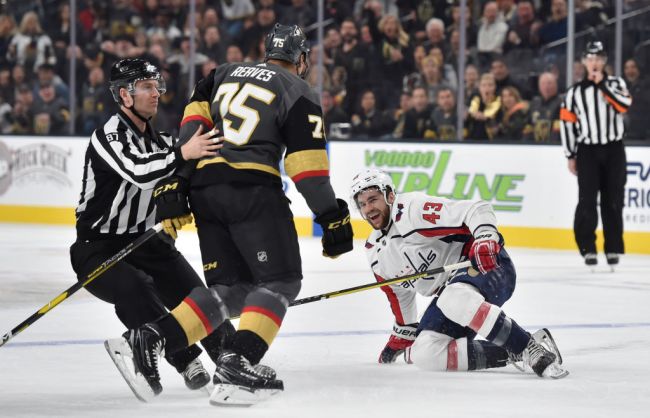 The New York Rangers open the 2021 NHL season against the Washington Capitals on October 13 and it is going to be INTENSE. A lot of bad blood was spilt between the two sides at the end of last season.

During a May 4th meeting, noted scumbag Tom Wilson sucker punched Rangers forward Pavel Buchnevich in the back of the head and slammed Armeti Panarin into the ice head-first. When they squared off the next day, things got violent quick.

The game started with an all-out line brawl and multiple fights broke out throughout the evening. Meanwhile, Wilson left the game with “an injury.”

As a result, the Rangers are gearing up for a war in the season-opener.

Recently-acquired enforcer Ryan Reaves has been teaching his new teammates how to fight. He knows a thing or two about throwing cinderblocks.

Ryan Reaves is so calm the entire time. Terrifying. pic.twitter.com/O95Xhbf3uv

In fact, Reaves once called himself “the solution to your Tom Wilson problem.”

Ryan Reaves with a huge hit on Tom Wilson.. pic.twitter.com/HZjLDDdp8e

ryan reaves laughing in the face of tom wilson after upending him is everything ive ever wanted, and more pic.twitter.com/Zn1il3EVYx

Now, ahead of what is set to be a physical, savage matchup between two teams with a detestation for one another, Reaves is sharing his wealth of fighting knowledge. He has been taking time during training camp to get the Rangers ready for fisticuffs.

What has Brennan Othmann learned while being with the Rangers?

"That everybody is really good" 😆

There is one holdout, however. Kaapo Kakko, New York’s second-overall pick in in 2019, doesn’t think he would be much of an asset in a fight.

We joked with Kakko about Kravtsov getting fighting lessons from Ryan Reaves and asked if he'll do the same now that he's bigger and stronger:

It’s probably for the best that he won’t be involved in the nearly inevitable violence. Things are going to get nasty.