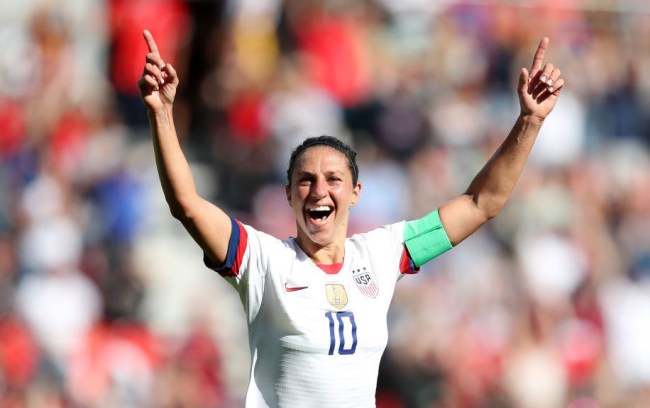 Last week, U.S. Women’s National Team star Carli Lloyd decided to crash a Philadelphia Eagles practice and turned more than a few heads when she managed to drill a 55-yard field goal with ease, which is certainly no small feat even for guys who kick them for a living.

A couple of days ago, we learned that an NFL team had reached out to Lloyd to see if she had any interest in showcasing her talents during a preseason game, and while she was unable to accept the invite because she had a soccer game to attend to, it appears she might be serious about pursuing a new gig.

According to ESPN, Lloyd’s longtime coach and advisor James Galanis says the forward is currently weighing her options and could be gearing up to pursue a spot on an NFL roster ahead of the 2020 season, saying:

There’s no doubt Lloyd would have some serious work cut out for her, as some observers noted she took a five-step run-up to the ball during her appearance at Eagles camp as opposed to the two steps professional kickers normally rely on.

While Keenan Allen probably could have phrased things better, he also did have a point when he mentioned Lloyd might find herself in trouble if one of her kicks was blocked.

With that said, she’d be far from the only NFL kicker to ever get their shit rocked so I guess only time will tell if that serves as a deterrent.