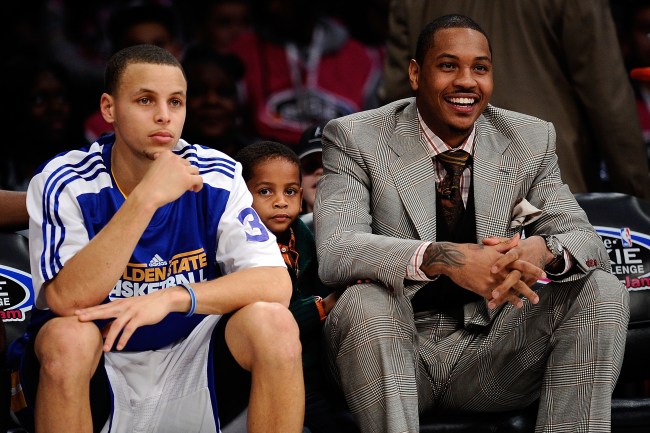 The last championship Carmelo Anthony won was 15 years ago when he was a freshman at Syracuse. Four teams and a decade-and-a-half later, the 34-year-old former NBA scoring champion is title-less and desperate.

Melo’s short-lived tenure with the Houston Rockets has an expiration date, appearing in just 10 games with the Rockets after signing for the veteran’s minimum right before the season. He averaged 13.4 points and 5.4 during his stint with the Rockets, but hasn’t been with the team since mid-November.

On Wednesday morning, Anthony sent a pair of since-deleted tweets that indicated that he’s committed to ending his career on his terms: by riding the coattails of champions. Carmelo shouted out to KD and Steph Curry of the Warriors and LeBron James of the Lakers in cryptic tweets that can only be translated into a cry for help.

If Carmelo Anthony joins the Warriors and wins a title, the league should consider implementing a honorary championship program as a lifetime achievement award of sorts. Just like successful people getting honorary degrees from Ivy League colleges they never graduated from, Adam Silver could give Carmelo a pity ring just to curbed this nonsense trend. Food for thought.

Carmelo – LeBron, wanna team up? I feel like I’m the missing piece to destroy the Warr- LeBron – pic.twitter.com/68cYj3QoaL

We all beg he signs with GS and ruins them

Melo sending out “u up?” Texts to everyone this week

"Welcome to the Lakers Mello! Now we envision your role on the team as our backup SG" pic.twitter.com/ZAxJj2Yd7a

It remains to be seen what Draymond Green thinks of Carmelo joining his team, as he’s already had some difficulty meshing with KD. Actually, come to think of it, I need this to happen.