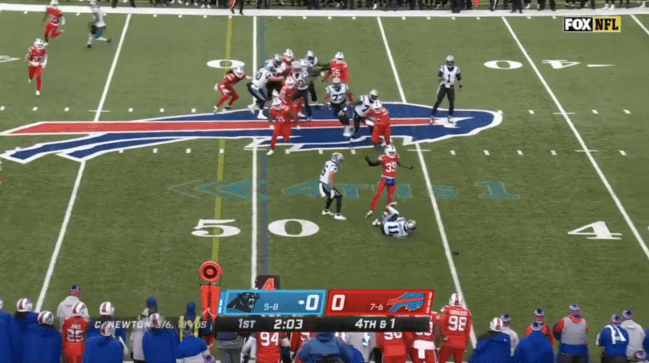 The Panthers are struggling to figure out how to right the ship after starting the year 5-8. They did not figure anything out in the first half against Buffalo on Sunday.

In fact, Carolina ran the worst fourth down conversion attempt of the year.

Prior to the game on Sunday, the Panthers’ starting kicker Zane Gonzalez suffered an injury during warmups. As a result, the team was forced to hold an open tryout at the position just minutes before kickoff and it did not go well.

Because of the uncertainty at kicker, head coach Matt Rhule was less likely to kick field goals, no matter the distance. That may not have been a factor into his decision on 4th-and-1 in the first quarter, as the ball was just beyond midfield, but the reason didn’t matter.

No matter why the Panthers decided to go for it on fourth down (probably just because the analytics said so), it didn’t work. At all.

Cam Newton took the snap out of the shotgun and faked the handoff up the middle. After the the play-action, he didn’t take a drop and quickly looked to his left.

On the receiving end, Robby Anderson was waiting for the pass just behind the line of scrimmage. Before the ball even reached the halfway point between Newton and Anderson, a Bills defender stepped up and laid him out. The pass fell incomplete for a turnover on downs.

Even if the ball (which was somehow under thrown) had reached Anderson, he was almost five yards behind the line of scrimmage with nowhere to go. Not great.