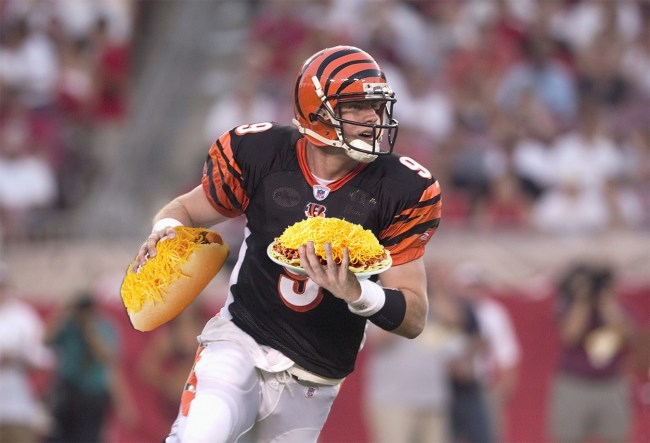 When it comes to food, the great City of Cincinnati is famous for its beloved Cincinnati-style chili. It’s easily the most famous dish from the region: Ground beef in a savory chili sauce packed with spices, topped with “the ways” – cheddar cheese, onions, kidney beans, served on a plate of spaghetti.

The plate part is important; Cincinnati rarely comes in a bowl, like other kinds of chili. Like ordering a cheesesteak “wit Wiz” in Philadelphia (with onions and cheese whiz), it’s important to know the “ways” before you head to a chili parlor. The Ways for Cincinnati chili are as follows:

One of the most famous chili parlors dishing out this regional specialty is Skyline Chili, which also serves Cheese Coney: A hot dog in chili sauce covered in shredded cheese.

Finally got to @Skyline_Chili to commemorate the Bengals in the Super Bowl. This Four-way with onion and extreme habanero cheese saved me from having to chug a can from the supermarket. Now please open a new location near Brooklyn, Ohio. pic.twitter.com/N1muudlqZn

What is Skyline Chili?

Skyline Chili is one of the most renowned places to get Cincinnati chili, with restaurants across Ohio, Indiana, and Kentucky. It was opened in 1949 by Greek immigrant Nicholas Lambrinides, making it a landmark institution in the Cincinnati culinary scene.

If you know anyone from Cincinnati, you know just how important Skyline chili is to them.

In fact, it’s so beloved by Cincinnati sports fans that some actually chugged Skyline’s famous canned chili sauce to celebrate the Bengals punching their ticket to the Super Bowl.

These videos went mega-viral all over TikTok.

Let's all chug skyline today for the Bengals !!!! @CincyProblems pic.twitter.com/Y52n4S0qBd

Skyline Chili – Not Loved By All

But to many outside Ohio, Skyline chili is a “you either love it or hate it” food. Some have compared it to “prison food.”

It’s even been used as a clever fantasy football punishment, with one Cincinnati man in 2020 spending 10 hours In Skyline Chili, eating 14 Coney Dogs.

In July 2021, New York Mets play-by-play broadcaster Gary Cohen railed against the dish during a game against the Reds, calling it “disgusting” while b-roll of the dished played during the game.

“This is supposed to be food that you actually eat…You need to try everything once. What doesn’t kill you only makes you stronger. Try it once, and then you’ll never eat it again.”

This outraged many Cincinnatians and Skyline chili evangelists.

This same sentiment was echoed by CBS Sports soccer reporter Grant Wahl in November 2021. On the Dan Le Batard Show, he called Skyline Chili “the worst food associated with a city”, recounting a personal experience.

“It’s the worst food associated with a city that I have ever experienced.” – @GrantWahl on skyline chilli in Cincinnati.😉 pic.twitter.com/F7wxO7rAAI

What about NFL legend Carson Palmer? After all, the quarterback laced up Bengals for seven seasons, calling Cincinnati home for about 10 years.

I asked Palmer about Skyline chili, the native dish of Cincinnati, during an interview at the Frito-Lay’s Calle de Crunch Super Bowl experience in Los Angeles.

“I lived there for 10 years and had it one time,” Carson tells me.

He didn’t go any further, but his lack of elaboration speaks volumes.

That might rattle Bengals fans – 10 years in Southwestern Ohio and only going to Skyline Chili seems like Cincinnati sacrilege.

But before they rage, Palmer proclaimed the greatness of Cincinnati football fans. “TThey understand football,” Palmer tells me, unlike other flaky fanbases.

“I’m rooting for the Bengals… I can’t imagine that city having a Championship parade. The excitement and energy in that city.”

Watch the full conversation below, including Carson Palmer’s favorite Super Bowl snack – nachos, with jalapeño, with the perfect amount of cheese, layered.

Skyline Chili, it is not.