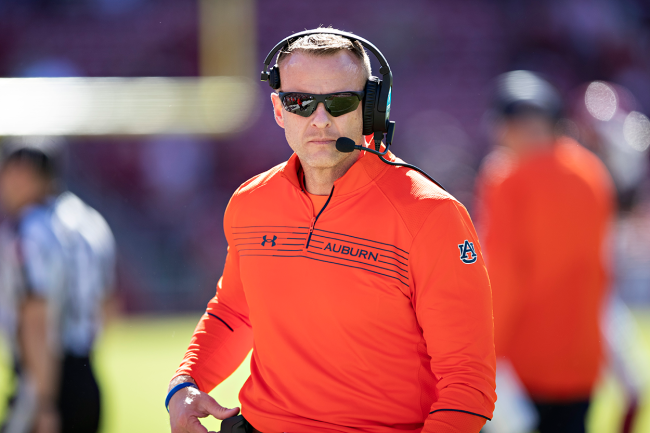 When Bryan Harsin was hired as the head football coach at Auburn University, there was a lot of people behind-the-scenes who did not agree with the hire. As a result, his first year on The Plains was utterly chaotic.

The Tigers went 6-7 in 2021 with a heartbreaking loss to Alabama in the closing moments of the game and a bowl loss to Houston. That led the Auburn boosters who were already upset with the decision to hire Harsin to grow even more angry.

And then it was chaos.

Auburn’s defensive coordinator took a significant pay cut to coach elsewhere and rumors started floating about Harsin and his personal life. All of them proved to be untrue, and the overwhelming belief is that they were spread by the boosters in an effort to get him fired.

Ultimately, the school opened up an extensive investigation into Harsin, his conduct, and how he runs the Auburn program. Harsin remained adamant that he did not do anything wrong throughout the entire process and the investigation found that to be the case. He was cleared of all allegations.

Barkley issued a stern warning to the fanbase during a recent interview. He said that he wishes he could “slap the hell out of” the people who are bothering Harsin.

"For the people who keep bothering this man…I wish somebody would just slap the hell out of them." – Auburn legend Charles Barkley had Bryan Harsin's back when he joined us in studio. @AuburnFootball @CoachHarsin @AGreeneIV @coachbrucepearl pic.twitter.com/ysAZrV6aAk

Auburn fans are not known for their rationality. However, maybe, just maybe, they will listen to Barkley, because he is right.