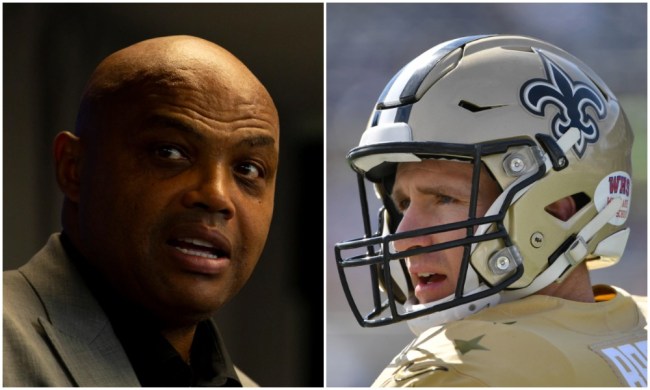 Drew Brees has been getting absolutely torched by anybody and everybody after his interview with Yahoo on Wednesday after he shared his beliefs about kneeling during the national anthem. Brees’ comment saying that he will “never agree with anybody disrespecting the flag of the United States of America or our country” has a lot of people extremely upset.

LeBron James has reacted, Stephen Jackson blasted him in lengthy rant and Shannon Sharpe even said he should retire from the NFL, and those are just three people of the thousands upon thousands that have ridiculed Brees over the past 48 hours and counting.

Charles Barkley however thinks that all of the hate that the future Hall-of-Famer has received is “overkill.”

During a special edition of ‘Inside The NBA’ on Thursday night, Barkley explained that while he didn’t necessarily like what Brees said, the reaction by many people has been too overt the top in his opinion.

“I want to make it clear, I did not like what he said right away, bt the vitriol and animosity and hatred he just got for the last 24 hours, I thought it was overkill,” Barkley said. “That’s just my personal opinion.”

“I have never heard a bad word about Drew Brees in my life. He made a mistake, but we’ve gotten to the point in society where everybody on social media thinks they are God, judge and jury.”

Barkley isn’t the only person that has come to Brees’ defense in one form or another. Some of his current and former teammates have stood up for the Saints quarterback while Tony Dungy offered up an honest opinion stating that Brees ‘can’t be afraid to say what he said.’