Stephen Jackson Calls Out Drew Brees: ‘Bad Timing… If You’re Not With Us, You’re On The Other Side’ 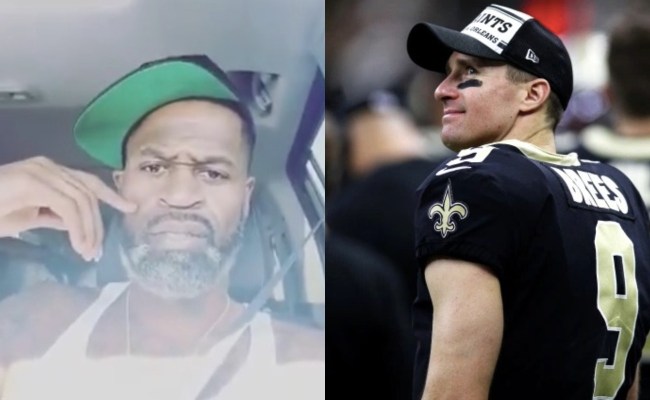 Clearly unaware of the current moment history, New Orleans Saints quarterback Drew Brees was unable to do the one thing everyone in this country should be doing right now — shutting the hell up and LISTENING to the African American community — and answered a question about NFL players kneeling during the National Anthem with the following answer: “I will never agree with anybody disrespecting the flag of the United States of America or our country.”

Hey, Drew, way to literally televise that you’ve learned absolutely nothing in these last few years and (more shockingly) weeks. This is a historic moment and the most you can offer as a team leader is a widely-debunked argument about patriotism.

Naturally and swiftly, the sports world has dunked all over the future Hall of Famer’s head: from LeBron James to Malcolm Jenkins, to Alvin Kamara and Michael Thomas and Jamal Adams and Aaron Rodgers, athletes across the American sports world have spoken out to express just how insensitive Brees’ comments are in this current climate.

Stephen Jackson, the NBA champion who was friends with George Floyd — the horrifically murdered human being who sparked this entire revolution — has joined that chorus of athletes who are speaking out against Brees.

Despite the fact that countless United States military veterans and athletes (and citizens and politicians, yada yada yada) have made it clear that the National Anthem kneeling has NOTHING TO DO WITH THE MILITARY OR THE AMERICAN FLAG, there are stilI people like Drew who refuse to accept anything but their own reality. In Drew Brees’ world, the definition of what the National Anthem means is sculpted by him and him alone, and anyone who thinks otherwise is, and I quote, disrespectful.

I'm proud of my Marine Corps service, but it is a largely private pride. Today is a day when I felt I needed to put it out there.

Drew Brees, you spoke. Now I need you to listen. https://t.co/iKw5hawBOb