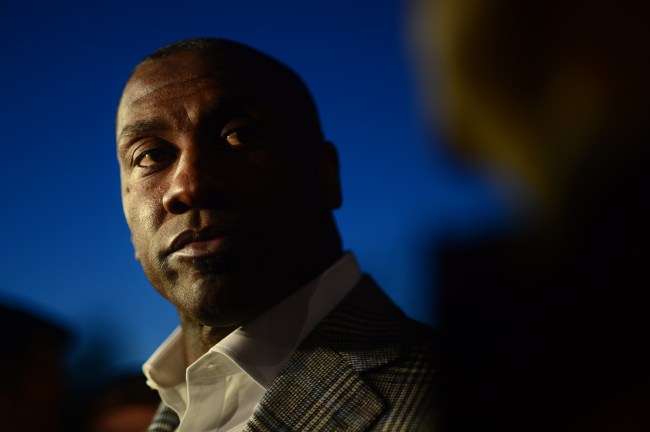 Shannon Sharpe sure didn’t mince words when it came to addressing Drew Brees’ highly criticized comments regarding the New Orleans Saints’ quarterback’s stance on peaceful protests during the National Anthem prior to NFL games. In fact, the FS1 host went on a scathing rant calling for Brees to retire now because, in his mind, there’s no way he can repair his relationships with teammates; specifically African-American players who have been vocal in slamming the signal-callers comments.

As a recap, while talking to Daniel Roberts at Yahoo!, Brees was asked about his thoughts on “players kneeling again when the NFL season starts” to display peaceful protesting and showing unity against police violence — similar to how Colin Kaepernick, and a few other players, did a couple of years ago. The future Hall of Famer fired back with, what turned out to be, quite the unpopular stance, saying he’d “never agree with anybody disrespecting the flag of the United States of America or our country.” Take a look below at the interview.

Pro athletes from all sports piled up on Brees. From LeBron James, to Stephen Jackson, to Louisiana-native and NFL Hall of Famer Ed Reed, to the quarterback’s own teammates, people everywhere demanded he educate himself on the real issue and listen to what the protests are about in order to make change. And, while Drew Brees did issue an apology Thursday, Shannon Sharpe was still heated about Brees’ original stance, and lit into him on FS1’s Undisputed this morning.

"What makes the black man’s fight so hard is people like Drew Brees. If you can't get a guy who grew up with blacks in the locker room from pee-wee, high school, college and the NFL to understand our plight, then who will?"

“Drew Brees still doesn’t seem to get it. Now he issued an apology, Skip, but it’s meaningless,” Sharpe said during the show. “Because the guys know that he spoke his heart the very first time around. Now, I don’t know what Drew’s going to do, but he probably should just go ahead and retire now. He will never be the same. Take it from a guy that has been a leader in the locker room for a number of years. At every step, Skip, I’ve been the leader in the locker room. What he said… they will never look at him the same because he spoke his heart, and it wasn’t what he said, it is how he said it. He was defiant.”

As one can tell from his comments above, Shannon Sharpe feels disrespected by Drew Brees — which is a sentiment shared by plenty of people in New Orleans, where protestors even chanted “fuck Drew Brees,” while some even burned the quarterback’s jersey to show their true feelings.

While most of the reactions came prior to Brees’ apology, it’s clear the comments from the quarterback had already done plenty of damage. And, while he did the first step in admitting fault and claiming to “recognize that I am part of the solution and can be a leader for the black community in this movement” — which some of his current teammates respected — like all of us, he still has plenty of room to educate himself on these issues to help turn things around in our country.