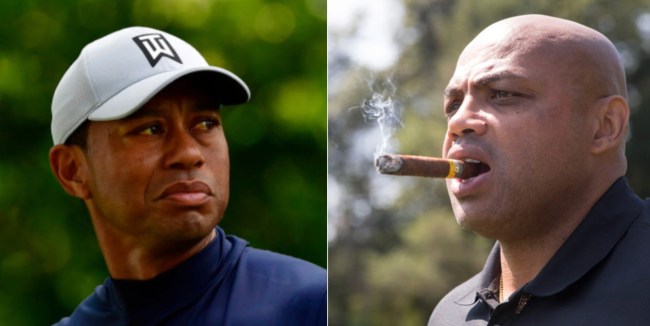 Charles Barkley is up for having a good time 24/7, 365 days a year. For that reason, he’s not the biggest fan of being around Tiger Woods.

The Fire Pit Collective’s Alan Shipnuck recently published an eye-opening excerpt from his upcoming book “Phil: The Rip-Roaring (and Unauthorized) Biography of Golf’s Most Colorful Superstar” in which Barkley compares Phil Mickelson and Woods.

The Basketball Hall of Famer made it clear that while Woods is the better golfer, Mickelson is much more fun to be around. He went as far as to say Woods is “not fun” and “just a golfer.”

“One of the reasons Phil has lasted so long is because he’s had a joyful life. Tiger won a bunch of tournaments, but there wasn’t much joy in it.”

“Sure, Tiger is a better golfer. You’re just in awe of his talent. But it’s not fun to be around him,” Barkley is quoted saying in the book. “Everyone in his world is uptight and sh-t, afraid to say or do the wrong thing.

“Tiger himself has always acted like he’s under siege. Gimme a f–kin’ break — you’re just a golfer, dude. When you’re with Phil, you’re guaranteed to have fun. He makes people feel good. Everyone around him is always smiling. That’s a huge difference, man.”

Barkley also noted that Woods and himself were friends up until Tiger’s scandal came to light in November of 2009.

As for Barkley being more of a Phil guy than a Tiger guy, that shouldn’t be all that surprising. The two have a passion for gambling, among other lifestyle choices. The two aren’t shy to throw down a bit of coin, and neither of them has ever shied away from the spotlight.