Charles Oliveira Has A Bold Suggestion For His Next Fight Night 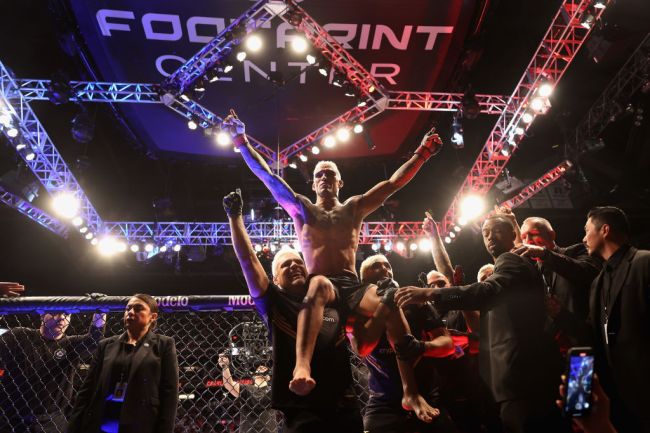 This past week was a weird one for Charles Oliveira. On Friday, missed weight for his second Lightweight title defense after digital scales had told him he was on weight. That cost him his belt before he ever stepped in the cage. Then he went out and put on an absolute show in the UFC 274 main event.

Oliveira needed only 1 round to finish Justin Gaethje, but unfortunately he still had to leave Arizona without a title belt around his waist. While everybody still seems to acknowledge Oliveira as the champion, he’ll still need to win another fight to get his belt back.

It turns out that Oliveira has a very creative idea for how that fight night could play out when he tries to get his belt back. Oliveira sent out a tweet today saying that he wants to fight Nate Diaz and Conor McGregor in the same night.

Just for the record, I like to break records and I want to break another one… Fighting twice in same night. I can knock Conor out, and make Dias tap.

What do you think @danawhite?

While it’s a weird idea to newer UFC fans, multiple fights in the same night was the norm in MMA for a long time. There are plenty of MMA legends who made their name winning one night tournaments in Pride and the UFC.

While there’s no way the UFC actually puts something like this together, I certainly wouldn’t bet against Oliveira to take out Diaz and McGregor in the same night. After beating Dustin Poirier and Justin Gaethje the way he has, Oliveira has made it difficult not to wonder if he’s the best lightweight of all time.

At this point, he might actually only be a few fights away from the only interesting challenge left to him is more than one fight in a night.