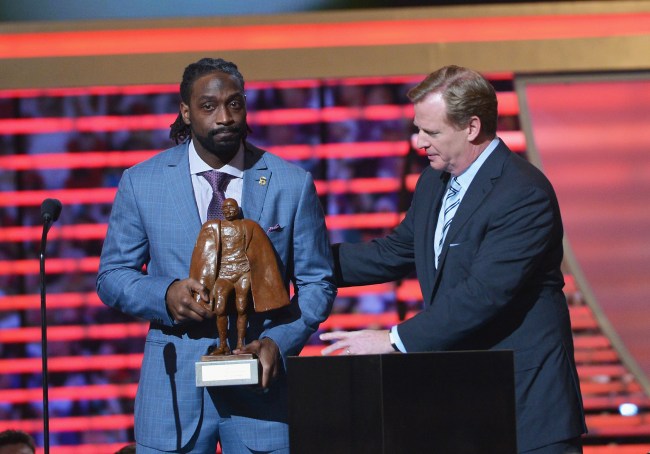 The common career trajectory for a former NFL star when he hangs up the cleats is to order a bunch of suits and take his seat next to Ray Lewis or Steve Young in the talking head booth. It’s a natural progression.

Charles Tillman is cut from a different cloth. After carving an extremely productive 13-year career out of forcing 44 forced fumbles (nearly doubling the next closest defensive back during his playing days) and earning the eighth most pick sixes in NFL history, the former Walter Payton Man of the Year decided down a different route.

Five months ago, we reported that the 37-year-old Tillman bailed on his Fox NFL Kickoff contract to pursue the life of an FBI agent. Tillman, who turns 37 today, needed to act quick as the FBI requires prospective candidates for special agent to be 37 or younger at the time of appointment.

Well, it looks like Tillman has secured a badge and is now working for the Federal Bureau of Investigation full-time.

The 13-year NFL veteran entered the 20-week program last year, as first reported by the Chicago Tribune, and had until his 37th birthday (Feb. 23, 2018) to earn his badge due to a stipulation that a new agent must be appointed before he or she reaches that age.

A spokesman for the bureau told Sporting News that it does not comment on personnel matters, and Tillman’s family couldn’t be reached, but a source close to the situation said on the eve of Tillman’s 37th birthday, “He is currently working for the FBI. (He) has his badge and everything.”

Tillman’s choice of career shouldn’t come as a total surprise, as he’s always had an interest in law enforcement, earning a bachelor’s degree in criminal justice from the University of Louisiana-Lafayette before the Bears drafter him in 2003. And, as the Tribune points out, Tillman grew up in a military family, his father was a sergeant in the Army, which is why Tillman attended 11 schools from kindergarten through 12th grade.

Back in 2010, Tillman spent eight days on a tour visit with troops in Iraq and Kuwait. He was selected as the winner of the NFL’s Salute to Service award in 2012.

Kind of makes me feel shitty about what I’ve achieved in my life. Thanks for that, Officer Tillman.