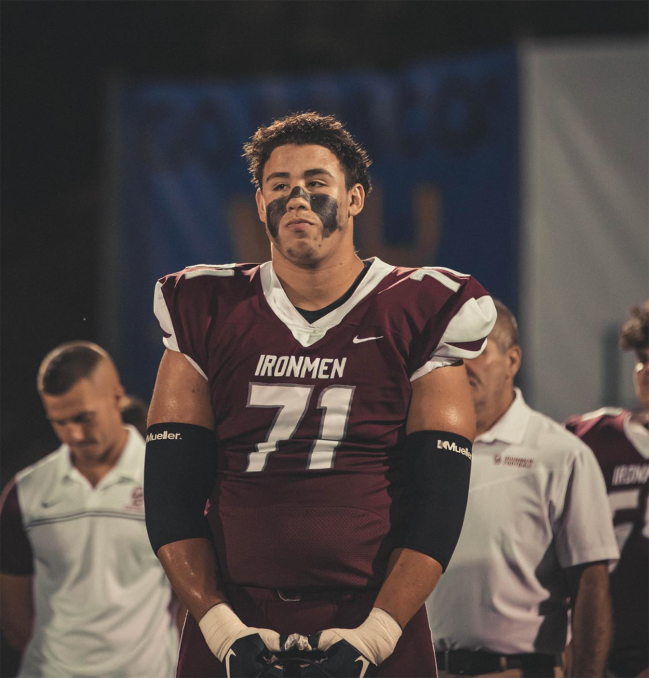 The average top speed of an NFL offensive lineman sits around 15.779 miles per hour. Offensive tackle recruit Chase Bisontis is already putting up faster numbers as a junior in high school.

Bisontis, a four-star prospect out of Don Bosco Prep in New Jersey, stands 6-foot-5, 304 pounds. He is unfathomably quick and nimble for his size.

As things currently stands, the Class of 2023 recruit is ranked as the No. 5 player at his position, and the No. 58 overall prospect in the country. He has offers from Alabama, Auburn, Arkansas, Georgia, LSU, Miami, Michigan, Notre Dame, Ohio State, Ole Miss, Oklahoma, and Texas, as well as 25 others.

My Top 8‼️Thank you to all the schools that have been recruiting me. These will be the schools I will be focusing on💯 Where’s home❓ pic.twitter.com/xQYwhLMA6F

Basically, Bisontis can go anywhere that he wants in the country. And understandably so.

His tape is ridiculous. Any defender that tries to get in Bisontis’ way is finishing belly-up on the turf below him, and it’s not like he is playing at a powderpuff school— Don Bosco is one of the premier programs in the Northeast.

In addition to Bisontis’ film, he has all of the intangibles that could make him a great left (or right) tackle on the collegiate level. Obviously, he is big.

But big doesn’t always translate to good. Often times, some of the big lugs in high school go on to struggle with the pace of play and raw athleticism in college.

That won’t be an issue for Chase Bisontis. He is remarkably agile and incredibly speedy.

Earlier this week, Bisontis showed off his speed. He got on one of the self-powered treadmills that track top speed and reached 17 miles per hour — more than a full mile per hour faster than that of his eventual NFL counterparts.

And it was only his first time on that type of treadmill. Once Bisontis gets some more practice on the unique machine, his top speed will likely increase.

Wherever Bisontis ends up, the Big Uglies will be the better for it. The four-star recruit plays well above his ranking and could be a starter at a Power Five school upon his arrival. Imagine getting in the way of someone running 17 miles per hour who stands 6-foot-5, 300 pounds… GET OUT OF THE WAY OR GET RUN OVER!