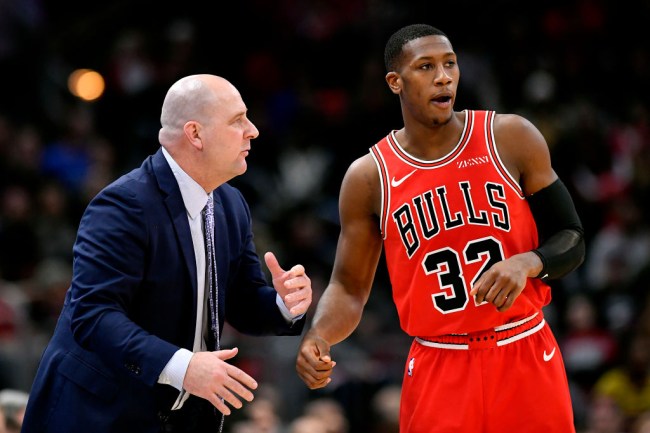 Bulls head coach Jim Boylen is an old-school kind of guy and approaches things in a unique way. His latest coaching tactic involves a custom-made time clock and time cards.

According to The Athletic, Boylen had the time clock made so his players can punch in and out of work like they’re working some hourly paid job. The clock is at the practice facility and players have their own cards they’re responsible for punching into the machine before and after practice.

Folks, I’m not too sure about this one.

I get that it’s a way to track the players and have a ‘go to work’ mentality, but these guys are making millions of dollars and don’t really need a helping hand to go to practice and put in the work they need to. The whole thing is extremely corny.

Tracy McGrady seems to think it’s dumb too, he said as much on ‘The Jump.’

There’s no way I’m coming in, making millions of dollars, and you’re about to have me punch a clock to play basketball? No. Hell no. I’m not doing that, especially if I’m a veteran player. You might wanna keep tabs on these young players when they’re coming in. But if I’m a vet? Get the hell out of here, I ain’t punching no clock.”

This is really some high school basketball kind of shit in my opinion. What does Boylen think, some of his players just aren’t going to show up to practice? What happens if a player forgets their card one day, is he going to take money out of their non-existent hourly paycheck?

Old-school time clocks like that are hardly ever used anymore these days, everything is digital, but like I said, Boylen is an old-school guy.

The clock didn’t do its job for opening night as Chicago fell to the Hornets.