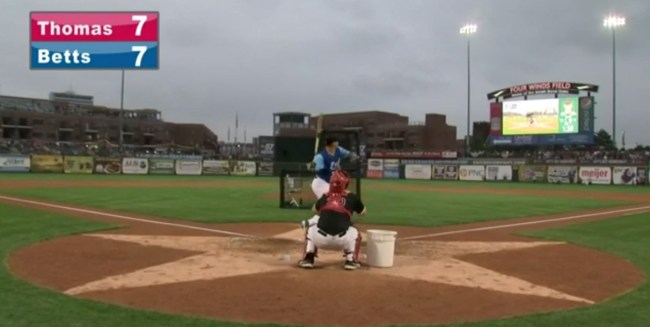 The Midwest League held its 2019 Home Run Derby Monday night, the day before the Class A league’s All-Star Game, and Tampa Bay Rays prospect, catcher Chris Betts, made sure it was certainly one to remember.

Betts, a 2015 second-round pick by the Rays, who made the Derby after hitting 12 home runs in 58 games in the first half for the Bowling Green Hot Rods, was in it to win it from the start. He won his first round matchup with seven home runs, then cranked out eight in round two to meet Kane County Cougars center fielder Alex Thomas in the finals.

Thomas batted first, hitting seven more homers, but it was the 22-year-old catcher who walked off, literally, with the championship, celebrating with a bat flip for the ages.

Here it is again in GIF form so you can watch it over and over again because it’s fan-freaking-tastic.

And here’s a couple more angles for the same reason.

Our man @ChrisBetts26 with an epic bat flip after winning the MW League HRD pic.twitter.com/H3F5PbHUZO

Betts is having a lot of fun with it too.

So about last night… pic.twitter.com/kiaHcZ76il

After winning the $1,000 prize, Betts was asked what he will do with the money and replied that his rent is due, but he might try to turn it into a little more money by visiting a casino.

So where does Betts’ bat flip rank among the best we’ve shared over the years?