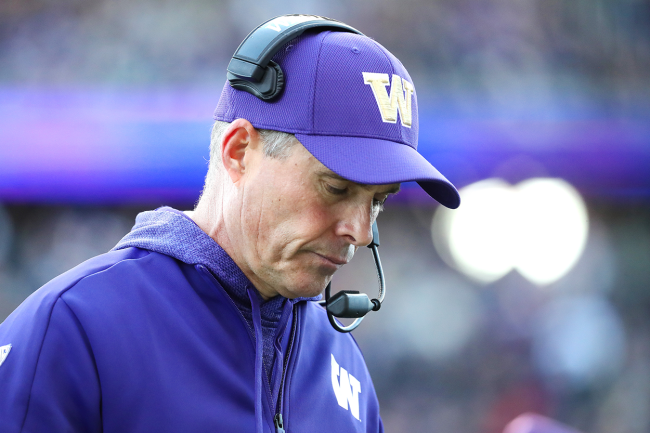 Chris Petersen spent 19 years climbing his way to the top of a college football program. But after just 13 years as a head coach, he suddenly stepped away from the game at only 54 years.

The decision came as quite a shock to many, especially considering that Petersen went 147-38 during his career. However, the former Boise State and Washington head coach is at peace with his decision.

Petersen recently joined Erik Korem on The BluePrint podcast and opened up on a variety of topics. It was a very insightful conversation.

Most notably, Chris Petersen spoke about how college football consumed him and took a significant, negative toll on his mental health.

During the conversation, which talks about building a game plan for life, Petersen explained why he left Boise State for Washington. It wasn’t necessarily about the Power Five conference opportunity, but more of an escape from his problems in Idaho.

At first, everything was going about as well as it could have. Petersen was happy in Boise and loved the program he was leading.

“So when I was at Boise State, I was energized and really driven for almost all of my time there.”

“…I had a lot of chances to leave Boise State at that time, but it never really entertained those offers because I was so driven and excited and energized with what we were building there.”

But things quickly started to fall off. Not necessarily on the field, but off.

“But my last year there, something really started to change and I felt like I wasn’t being that good of a leader, I felt like I was short with people and I started to get cynical. We won most of our games but then the press or other people started coming at us with stuff like ‘Why was that game so close?’ Part of the job is answering those kinds of questions but that really started to get under my skin and I was really starting to slide backwards as far as the type of coach and the type of leader that I wanted to be.”

Petersen then goes on to say that even his wife started to see the change that was happening within him. She even suggested after some time that he should consider speaking with someone about how he felt or find a new opportunity.

“The job felt like it was becoming very restrictive and narrow to me and I wasn’t enjoying the part of this process that I really needed to embrace.”

“So when the Washington job came along, I thought, ‘You know what I need? I need a new set of problems.'”

“I am embarrassed to sit here and tell you today that was my thought process, that I was thinking that I’m going to take my old problems, throw them away, and get a new set of problems at Washington, and that was going to solve my problems.”

As the conversation around mental health continues to become more prominent in today’s society, Petersen offered a very unique perspective on what it takes to be a college football coach.

After eight years at Boise State, Petersen took the same job with Washington in 2014. He won two Pac-12 titles while there. But by the end of his short and final head coaching stint with the Huskies, he hung up his headset for the final time.

“I go to Washington and it’s numbing and its blurry for almost two years but you’re in the fight so hard and its a new set of problems. Then again, I get to the end of year five and I’m starting to have those same feelings because I never really got healthy enough. I didn’t have a great game plan for my life, on how I wanted my life to be. I didn’t have great self-talk, I didn’t have great recovery skills…all these things I’ve learned since.”

Ultimately, Petersen grew tired of the grind. Being a college football coach in today’s day and age, with technology, social media and constant communication is exhausting. It’s a year-round gig— once the season ends, the focus turns to recruiting, and then after national signing day the attention turns to the next year’s team and the following year’s recruiting class.

Being a head football coach on the collegiate level comes with a lot of stress and Petersen was able to recognize that it was best for his mental health to step away. Just like Matt Luke did after winning a national championship earlier this year.

There are changes necessary. Both on the NCAA level to keep its coaches healthy, as well as on the individual level, with coaches seeking the resources they need to stay happy and in the right headspace long term. But the latter is much harder than it sounds.