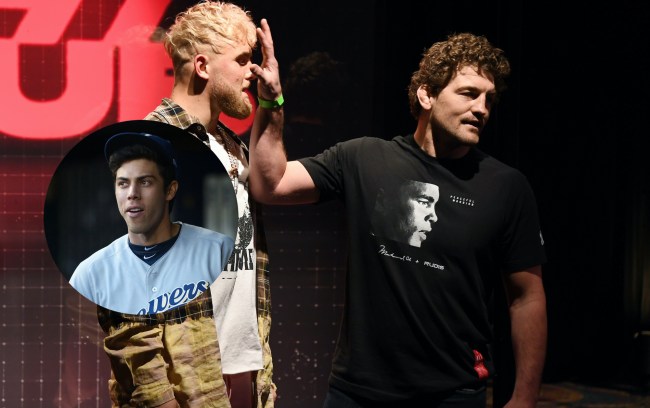 Earlier this week, we brought you the story that “TikTok Star” (trust me, I hate typing those words as much as you hate reading them) Bryce Hall claimed he’ll be getting paid more than $5 million to participate in a celebrity boxing match against Youtube star (again, just launch the entirety of humanity into the sun at this point) Austin McBroom.

“So, I’m getting 4% of pay-per-view sales, then $5 million as soon as I step in the ring and then a $1M knockout bonus,” Hall told No Jumper.

This newfound industry will write its latest chapter this weekend as former Bellator and UFC fighter Ben Askren will be taking on Jake Paul.

Given the reputation the Paul brothers have built over the years, it should come as no surprise that most people, including former National League MVP Christian Yelich, are rooting for Askren to win. The Milwaukee Brewers star outfielder even took to Twitter to let his feelings be known, telling Askren he’ll play him in a game of disc golf if he knocks Paul out.

You knock out Jake Paul you got a deal https://t.co/gKUkICcS7e

Despite Askren’s experience as a professional MMA artist, Paul is actually favored to win the fight, with CBS Sports currently having his odds to win at -180 (Askren odds are +155).

The pair will meet in the ring at the Mercedes-Benz Stadium in Atlanta on Saturday, April 17. The fight will be available to watch through traditional pay-per-view or through Triller’s FightClub app.

Paul could certainly use the victory, as he’s already losing the mental battle, as evidenced by his hilarious pitiful response to Askren mushing his hand in his face — nothing says “I’m ready to fight” like a good ole smack on the tummy.