Broncos Claim Joe Flacco Won’t Start On Sunday Because Of A Neck Injury, No One Believes Them 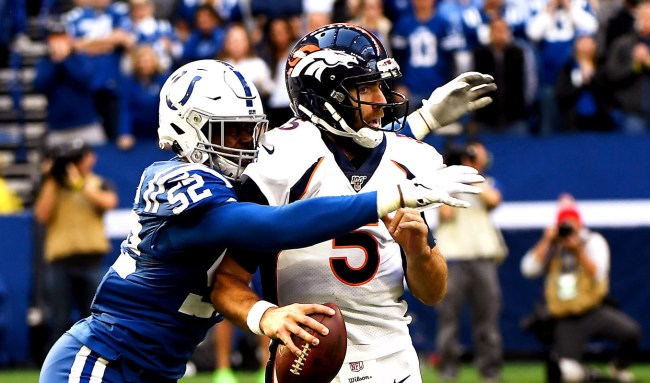 The Denver Broncos have announced ELITE quarterback Joe Flacco won’t start Sunday’s game versus the Cleveland Browns because of a neck injury. Absolutely no one on the internet believes them.

The reasons no one on the internet believes them is because Flacco seemed fine at the post-game press conference, has performed so poorly over the last three games that Troy Aikman was laughing at him on national TV, and, oh yeah, Flacco straight-up threw the Broncos’ coaching staff under the bus for the team’s play-calling after Sunday’s loss.

“We’re a 2-6 football team. And it just feels like we’re kind of afraid to lose a game,” Flacco told the media after the Broncos’ last-second 15-13 loss to the Colts. “Who cares if they have a timeout there at the end or not? Getting in field-goal range isn’t that tough. You’re just putting your defense in these bad situations and I just felt like, what do we have to lose? Why can’t we be aggressive in some of these situations? That’s kind of how I feel about a lot of the game today.”

On Monday, it was revealed by Broncos head coach Vic Fangio that Flacco, who has thrown 6 TD passes in 8 games (to 5 picks) is injured and 27-year-old Brandon Allen, who has been cut by the Jaguars and Rams and never played in a regular season NFL game, will be starting at quarterback on Sunday.

#Broncos coach Vic Fangio says QB Joe Flacco won’t play this week because of a neck injury. So, Brandon Allen will start against the #Browns.

Whatever you say, Vic.

Vic doesn’t lie well at all. Doesn’t bode well for his long-term success as a HC.

His neck looked fine during the press conference

"Hey Joe, sorry about your neck?"
"My neck's fine coach."
"We appreciate you toughing it out, but we're going to play it safe and rest you"
"But, I just-"
"Thanks for your time"

Joe Flacco is getting fleeced and finessed.

Neck injury? Must’ve got hurt while he was talking out the side of it.