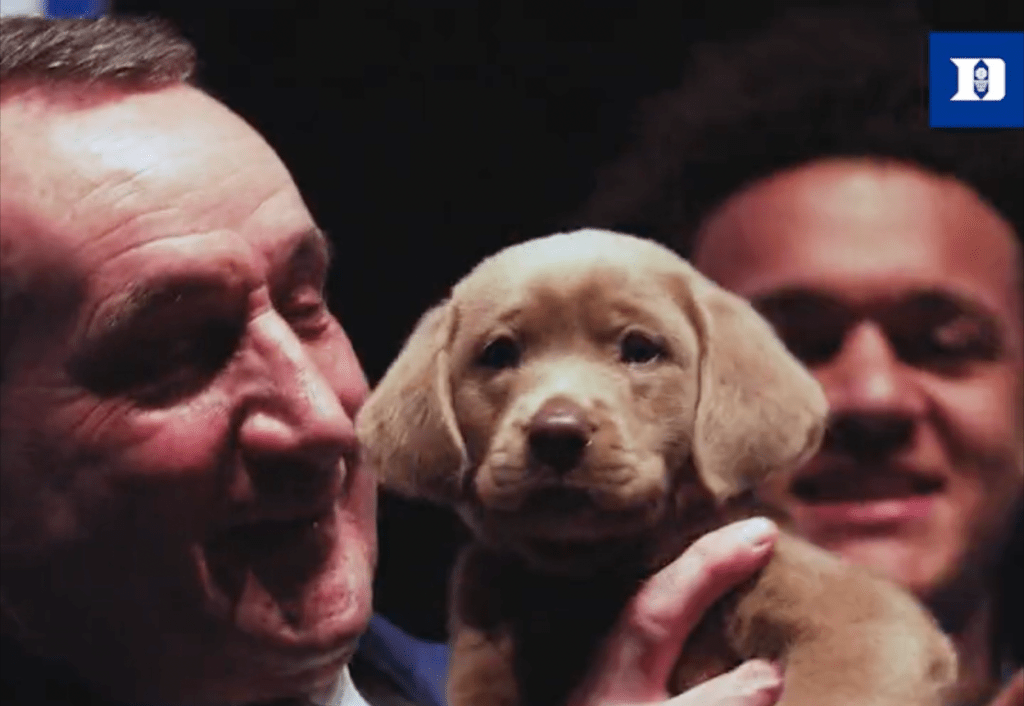 What do you get a guy who has everything? Coach K retired with tens of millions in the bank, the title of the Winningest Coach in College Basketball History (1,202 wins), and 5 National Championships. Getting him a deserving retirement gift could seem like an impossible task but Duke sorted it out and gifted Coach K a puppy, exactly what he asked for.

The puppy that Duke gave Coach K is obscenely cute. It’s one of those puppies that is so adorable you start talking differently when you see it. We’re talking about the kind of cuteness that turns dog haters into dog lovers with a single glance.

Even still, some Coach K and Duke haters still found ways to chirp this incredible retirement gift. Duke Basketball’s tweet of Coach K being surprised with his new puppy is full of responses from haters.

What are the haters saying in the replies? Let’s take a look…

UNC gave him a dog too pic.twitter.com/zdetFU9Eib

Well we know they wasn’t gonna get him a ring 🤡 🤡

How many ceremonies does this guy need

Even some of the haters caved to the cuteness:

I will always hate Dook but damn is that puppy cute.

And the vast majority of responses are positive. People love this puppy. It’s a ‘Silver Lab’ for anyone out there wondering about the breed.

I love this! Thanks for sharing! Go Coach K! Enjoy your retirement! Thank you for everything you did for @DukeMBB and the University! 👏👏👏

That is a good dog

That puppy is so dam lucky . That puppy already a goat baby 😎😊😁

Did Coach K Even Want A Puppy

Getting someone a puppy as a gift is a MAJOR RISK. Unless you live with that person or they’ve expressly told you they want a puppy, it’s a serious gamble. It’s not as if you can easily return puppies. Thankfully for Duke Men’s Basketball, Coach K told them he wanted another dog:

It is pretty funny to imagine Coach K potty training a puppy just days after taking a team to the Final Four. Or chasing the adorable silver lab puppy around the house as it knocks over trophies and left and right in a game of ‘you can’t catch me’.

Hopefully, Coach K will do the only responsible thing here and create an Instagram profile for his dog like most truly-obsessed pet parents do.