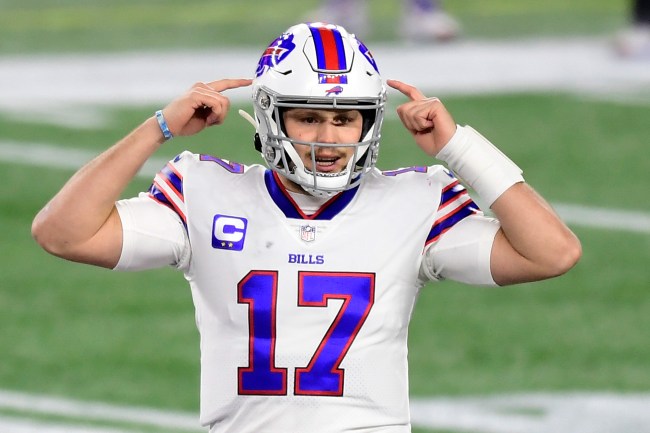 FS1’s Colin Cowherd has always been known to speak his mind, delivering plenty of questionable opinions to stir up debate and controversy in the sports media world. While most of his takes are nothing more than serious troll jobs — especially when somebody like Baker Mayfield’s his target — every so often, the loudmouth radio host actually makes a valid point.

Well, Friday morning may have just been one of those days.

Talking about the different quarterbacks as the NFL Playoffs begin, Cowherd went through his annual “Quarterback Face Bracket,” leaving two men on the board to choose from: Josh Allen and Patrick Mahomes. Now, conventional wisdom would lead most fans to pick Mahomes over Allen, right? After all, the former is coming off a Super Bowl victory in 2020. He won the league MVP award in 2018. He is as close to a video game player as we’ve ever seen.

Forget all of that, though, because, right now, Colin Cowherd thinks Allen is the better quarterback as the NFL Playoffs kick-off, and he gives some cold hard facts to prove his point.

“Over the last five weeks, Josh Allen has more touchdowns, fewer turnovers, and the higher passer rating than Patrick…Josh Allen, in this moment, is the better and more confident quarterback than Patrick Mahomes,” Cowherd said.

"Josh Allen, in this moment, is the better & more confident QB than Patrick Mahomes."@ColinCowherd fills out his 2021 QB face bracket (cc: @getnickwright) pic.twitter.com/6dru8uJpc1

Now, normally I’m one of those people who often slam Colin Cowherd’s opinions. Mostly because, well, they’re just that; opinions. He rarely goes to this depth to offer real facts to support his claim, typically relying on some snarky delivery to get people pissed off at him — and, obviously, engage with his hot take on social media and such. But this time it’s actually different.

I can’t believe I’m about to do this, because it’s rare I ever agree with Cowherd, but take a look below to see why the bold claim from the FS1 host about Allen over Mahomes actually isn’t so crazy. Stats are from the past six games for both quarterbacks, per Pro Football Reference.

While Mahomes’ total yards are more than Allen’s over the past six games, just look at how many more points the Bills’ signal-caller’s putting up. He’s averaging one touchdown more per game than Mahomes, and is playing so efficiently that his QB rating is an absurd 114.1. You might not agree with it, but Colin Cowherd’s dropping facts about who the better quarterback is right now.

Despite all that, it’s hard to bet against Mahomes. He’s got the experience. He’s proven himself in the NFL Playoffs before. He’s on the better team, presumably. So, on paper, it’s easy to declare he’s the better player right now and anybody would much rather ride him all postseason long.

But don’t overlook what Allen and the Bills are doing, because they might actually be the better team at the moment and have the better quarterback right now. They’re hungry, motivated, and trying to prove themselves, so Cowherd’s proclamation isn’t as far-fetched as some might think.