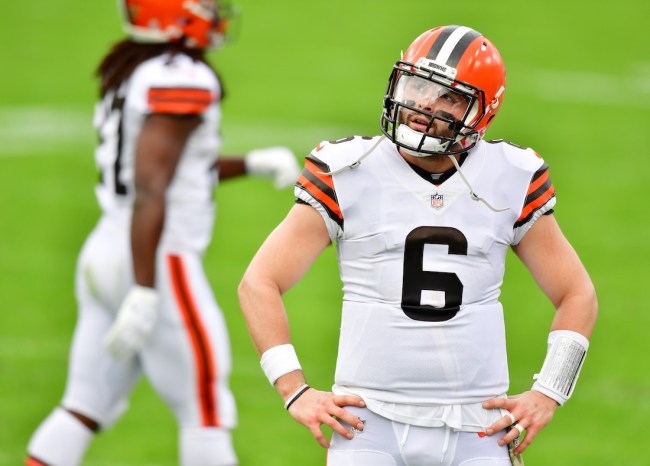 As a Browns fan, I defend Baker Mayfield like he’s my own son, trying to convince haters that he’s the savior of the longtime incompetent franchise and the quarterback who can take us to the Promised Land. Of course, I have my moments when I doubt that loyalty — like last season when the former No. 1 overall pick pissed the bed all season long — but, for the most part, I stand by the third-year player in hopes that he proves he can be an All-Pro passer in the league.

One guy who doesn’t have as much faith in that happening is Colin Cowherd, who routinely trolls Baker Mayfield and criticizes pretty much every single thing the Browns quarterback does. It started a couple years ago leading up to the draft, it continued when the two talked on set, and it’s something that each guy still often refers to on social media, with each trying to get the best of the other.

With Mayfield’s Browns sitting at 8-3 and hoping to reach the playoffs for the first time in 19 years, a Week 13 game against the Tennessee Titans would be a great time for the quarterback to ball out. In fact, it might be necessary, as both teams enter the contest with identical records in a tight postseason race.

Who knows if the former No. 1 overall pick shows out or not, but, in Cowherd’s mind, should Baker stink up the joint, his time as Cleveland’s starter could come to an end. That’s what the outspoken sports personality suggested on Friday, which is… quite the take.

"The Browns will make a decision privately on the flight back. If Baker gets rolled like he did against Pittsburgh or Baltimore, they're moving off of him." @ColinCowherd on the importance of Sunday's game vs. Tennessee: pic.twitter.com/zBX13W1DbI

Baker Mayfield has been playing better over his last few games, not only leading the Browns to a 3-1 record, but also being one of only two eligible starting NFL quarterbacks who didn’t throw a single interception in the month of November. That said, it’s not like the dude is letting it rip, with Mayfield acting more like a game manager than anything else.

Given Colin Cowherd’s latest opinion about Mayfield, it’s no surprise that plenty of fans on Twitter couldn’t help but criticize the radio host. Just take a look at what some were saying on Twitter.

This take is so weak. Week 1 against Balt was the first game under a new coaching staff without a preseason. Pitt was without Chubb. Raiders was in awful weather where Baker and Carr had the exact same stat line except a TD. Your takes are from someone who wants attention.

Remember when you said the Jets with Sam Darnold was going to be "the model franchise"? Or when you predicted the Ravens to go 16-0 this season just because Marquis Brown got swole? Petrich Farm remembers.

The Browns have done nothing but improved since Mayfield joined the team. With some continuity finally building, not just Baker, but the team is performing better as time goes on. Whether the team loses or wins, big picture it means nothing to Baker’s career.

He's again being controversial for clicks' sake. No way will they move off Baker, even if he has a horrible outing Sunday. CC makes me so sick w his attention-whoring disguised as sports commentary.

As mentioned above, the Baker Mayfield-Colin Cowherd feud has been going on for a couple years now, so we should expect things like this from the mouth of the sports commentator. Problem is, it’s highly unlikely that Mayfield’s Browns career hinges on this one game against the Titans. Sure, it’s important for playoff seeding, but games against AFC North rivals Baltimore and Pittsburgh (both at home) seem more critical in the grand scheme of things. Even then, Cleveland’s front office wouldn’t just give up on Mayfield with losses in all three of these games.

The elephant in the room is Baker Mayfield’s contract, which has a fifth-year option that the team could decide to exercise after this season. In that sense, sure, the Browns are evaluating their quarterback to determine if he’s worth the money or not, but to suggest that the team would make that decision on the flight home after the game against the Titans is just, well, idiotic.

Given Cowherd’s reputation for obscene takes — and his hatred towards Mayfield — none of us are probably surprised by any of this kind of opinionated analysis. Do better, Colin.