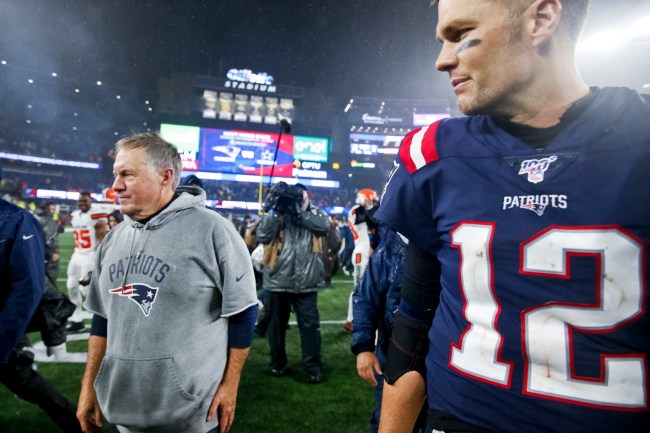 You’ve got to hand it to FS1’s Colin Cowherd, who’s never afraid to make a bold proclamation — whether for a reaction or for the sheer purpose of getting his true opinion out there. And during his radio show Thursday, the always outspoken host had a hot take about Tom Brady that’s so insane that it should honestly require a suspension for a day.

That’s because Cowherd had the gall to say Brady “never felt like Boston” during his 20 years on the New England Patriots. Even if you’re not a Pats fan, that should piss you off.

Before I go too far down a rabbit hole about Colin Cowherd’s comment about Brady, just take a look for yourselves at what he actually said — and some of the reasons he thinks the six-time Super Bowl winning quarterback never truly embodied Boston.

"Tom Brady has never felt like Boston. He conformed for 20 years."@ColinCowherd explains: pic.twitter.com/3oTlrUz0KT

“In New England, we thought he was stoic and part of the system. In Tampa, he’s taking these unnecessary risks,” Cowherd said Thursday on FOX Sports 1. “Or is he? Or is this who Tom Brady’s always been? He was just conforming to New England? California dude, this is who he is. He’s a risk taker.

WTF is Colin Cowherd even talking about right now? He makes Brady sound like a pretty boy who was handed the GOAT status he’s achieved, rather than simply remembering the facts: That the signal-caller was a sixth-round pick (No. 199 overall) who outworked everybody to become the best to ever play his position in NFL history. Don’t give me this B.S. about him conforming just because he played in Boston all those years. The dude was always Boston.

Just when you thought Cowherd was done, he just kept on going, trying to convince his listeners that Tom Brady was more Hollywood than he ever was Boston.

“Tom Brady is aspirational. He married a supermodel. He’s creating a global brand. He has houses in Costa Rica, Montana. Tom’s always been about growth and evolving. That’s not Boston,” Cowherd said. “Boston is you work hard, make a decent living, you buy a summer home on the Cape or maybe Maine, and that’s about as far as you leave, an occasional vacation down to Florida. That’s what Boston is. They stay there forever.

“Tom Brady is fun and happy. Boston is cranky and intense. Look at Tom Brady’s lifestyle brand — does it say Boston? No drinking, avocado ice cream, lots of yoga. That does not say Boston. It says California where Tom has multiple homes. It says west. Tom Brady was never Boston.”

I’m literally speechless right now, and can’t fathom how Colin Cowherd woke up Thursday morning and thought that this was what he wanted to say about Tom Brady. Wow.

Brady was never Larry Bird. He was never Paul Pierce. But the quarterback was revered by the Boston area during his two decades, and, although aspirational and unique in his approach, played with that blue collar, chip as big as a crater on his shoulder that most Bostonians have. It’s called grit, Colin, and TB12 proved he had it like all those other great Boston athletes.