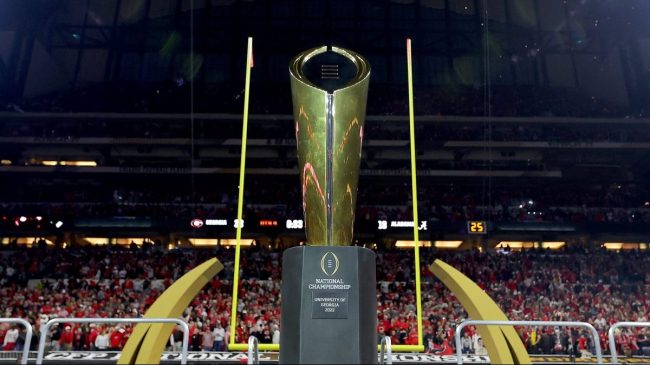 Major changes are coming to the college football world with the recent announcement of an expansion to a 12-team College Football Playoff.

The new format was years in the making but was finally announced on Sept. 2.

It will feature first-round byes for the top-four seeded teams. The format will also feature home games for higher-ranked teams in the opening round, and it guarantees a spot in the postseason to Power 5 conference champions.

But what about the fans?

Obviously, fans are excited by the prospect of home games to start the playoffs. But there are undoubtedly drawbacks to an expanded field. Fans have expressed concerns over what it means for the regular season, as well as doubts over how competitive the games will really be.

But one thing that hasn’t come up is what it means for future TV contracts. And that may not be a good thing.

College Football Playoff Could Be Split Up Over A Number Of Networks, Streaming Services

The expansion from four teams to 12 is expected in 2026 but could come as soon as 2024. ESPN currently holds the rights to all games through 2026. What happens after that is anyone’s guess.

Front Office Sports reports that ESPN is open to a deal that splits up the rights across various channels and streaming services.

“We’ve been clear to anyone who is interested that we are very willing to be flexible here and be creative in terms of this expansion,” said ESPN chairman Jimmy Pitaro.

The site also reports that both Amazon and Apple could enter the picture in 2026. While traditional powers CBS, NBC and FOX are all expected to join the fray.

College football fans better be ready to break out the ol’ TV guide in 2026. Because the College Football Playoff could be all over the place.