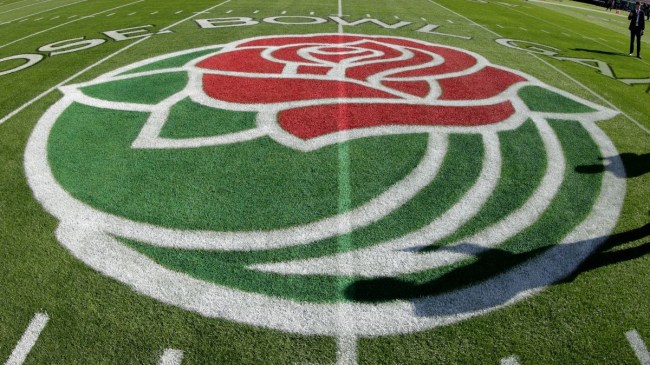 The future of college football is constantly changing. Whether it’s conference re-alignment, playoff expansion or name, image and likeness rules, the game looks nothing like it did just 10 years ago.

While it seems like we just began the era of the College Football Playoff, it’s on the verge of changing yet again. The playoff is set to expand from four teams to 12 teams in the near future. But when that change happens is still in flux. One major hangup that involves the Rose Bowl.

The Grandaddy Of Them All, as its called, is the oldest currently operating bowl game and has been played since 1902. It currently acts as a College Football Playoff semifinal on a rotation basis alongside the Orange Bowl, Sugar Bowl, Fiesta Bowl, Cotton Bowl and Peach Bowl.

But there are concerns that the change in playoff format may lessen the Rose Bowl’s importance. The Rose Bowl has waffled over whether to join the College Football Playoff in its expanded format. The playoff committee would like to expand as soon as 2024. But without a clear answer from the Rose Bowl, it becomes difficult to do so.

Now it appears that the College Football Playoff is giving the Rose Bowl an ultimatum.

ESPN’s Heather Dinich reports that those involved with the College Football Playoff have grown sick of waiting. Instead, they’ve given the Rose Bowl a Wednesday deadline to decide whether its in or out.

“We want the Rose Bowl,” a CFP source said. “We have a good partnership with the six bowls we are affiliated with, we do. And we want to continue with that. I hope the Rose Bowl will be part of that, but there’s no guarantee in any of that. None.”

While the Rose Bowl’s position in an expanded CFP isn’t the only obstacle that slowed the process, it is the last and most complicated. The discussion centered on one of the most lucrative television windows in college sports. Laura Farber, the chair of the Rose Bowl management committee, told ESPN earlier this month the game wanted to maintain the exclusive broadcast window on Jan. 1 at 2 p.m. PT in years that it would also host a CFP semifinal. – via ESPN

The Rose Bowl is currently exclusive to the Big Ten and Pac-12 in years when it’s not a semifinal. Whether that would change or not in the future has not yet been determined. Though the future of all major bowls is up in the air with the new playoff format.

The 12-team playoff features byes for the top four teams. The remaining eight will play in the first round, with the higher-seeded team hosting.

Beyond then, the expected format is four of the six New Year’s Six games serve as quarterfinals, with the other two acting as semifinals on a rotating basis.

That format would move the Rose Bowl from New Year’s Day, where it’s been almost every year since its inception. The only exception is years when New Year’s Day is on a Sunday or years when the bowl served as the BCS National Championship Game.