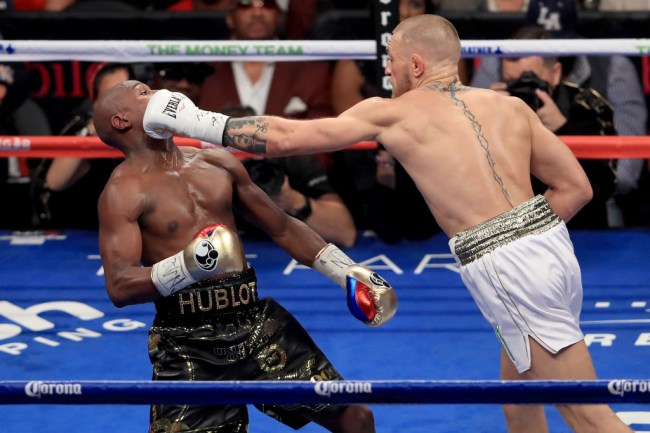 It’s been just over one year since Floyd Mayweather beat Conor McGregor in a technical knockout in the 10th round of arguably the biggest event in boxing history. The fight made the two fighters an unfathomable amount of money for a night’s work–with Mayweather securing a $100 million guaranteed disclosed paycheck and McGregor’s raking in $30 million.

If you thought the fighters would respect one another for playing a part in a giant payday, you were mistaken. Fast forward one year and Mayweather and McGregor are still jawing at each other from afar.

It all started with a compliment from Mayweather ahead of McGregor’s matchup with Khabib Nurmagomedov at UFC 229 in October, ending over a year hiatus for the two-division world champion.

“I don’t really have a prediction because I’ve never seen the guy fight that’s facing Conor McGregor—from what I know he’s a hell of a guy that’s on the ground—hell of a grappler—and he can wrestle.

“But, the fans want to see you stand up and fight. That’s what the fans like to see. But, Conor McGregor, he’s a tough competitor, like I said before Conor McGregor’s not gonna back down from anyone, he’s not scared, he’s a warrior.” [via TMZ]

If a man called me unafraid and a warrior, I’d probably send him an Edible Arrangements. Not The Notorious One. This was McGregor’s response:

Fuck the Mayweathers, except Senior and Roger.
There is no peace here kid.
Step up or step down.

McGregor, not one to forfeit the last word, replied quickly.

Easiest 9 figures I ever made! All work is what ? #MayweatherPromotions#TMT#TBE pic.twitter.com/32WGa78AHV

Setting the stage for a re-match? Eh, unlikely.

As far as McGregor’s upcoming UFC 229 event, Dave Meltzer claims it’s shaping up to being the second most in-demand ticket in UFC history, with over 1,400 secondary market tickets sold on StubHub averaging over $1,000 per ticket.