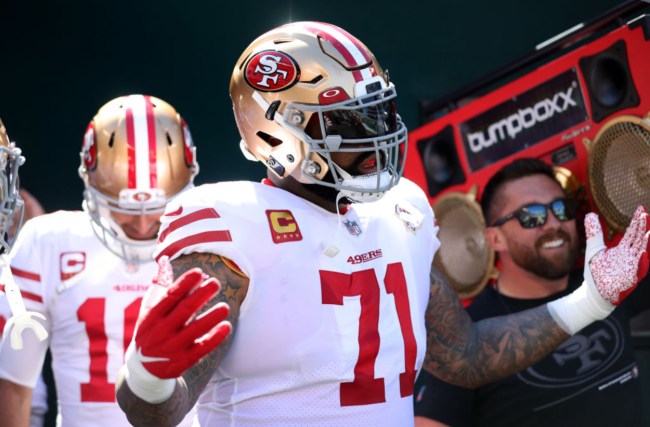 Dallas Cowboys fans were rightfully upset with how their team’s season ended in the Wild Card round of the NFL playoffs against the San Francisco 49ers. It’s got to be tough to watch your team crawl back from a 23-7 third quarter deficit only to witness them not have a shot at the end of the game because your quarterback takes off on a QB run with zero timeouts left.

While some Cowboys fans elected to throw trash at officials, which Dak Prescott praised them for, other salty fans decided to show their frustration by giving the bird to San Francisco players.

Veteran lineman Trent Williams was on the receiving end of a few middle fingers as he left the field. Thankfully the moment was caught on tape, too, because it made for one of the most iconic photos in NFL history.

Two very typical-looking Cowboys fans, with their sick tattoo sleeves, gave the 320-pound linemen the bird and Williams just pointed and laughed at them.

Shoutout to those two Cowboys, who I’m going to guess also love the Lakers and Yankees, for flipping off a cancer survivor just minutes after he earned the first playoff win of his 11-year career.