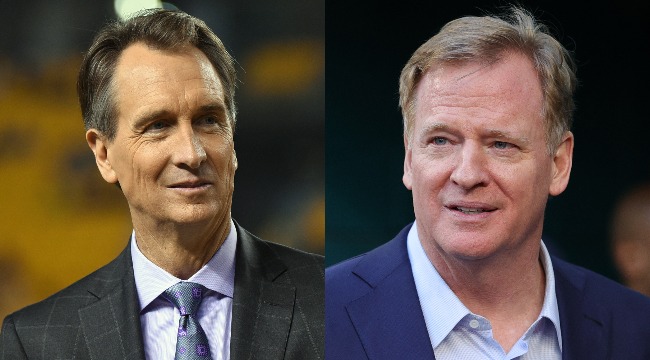 Imagine being Cris Collinsworth—a respected analyst who’s been in the booth longer than Judge Judy—learning that in 2020 a competing network shelled out 4x his salary to a guy to a guy with entry level experience.

No disrespect to Mr. Romo, but that is the kind of internal industry politicking that can make a pious man a bit faster and looser with the lips.

Which could be why Collinsworth is fresh off an apology for his shock over well-informed female Steeler fans, and why he’ll likely have a closed-door meeting with Goodell and his band of buffoons for his condemnatory comments Sunday night about the Eagles blatant tank job to secure the advance three picks in the upcoming draft (from 9 to 6).

Collinsworth then admitted to fearing retribution from the league for speaking the truth.

“Some of my friends in New York I think are going to have a few messages for me after the game. I’m afraid to pick up my phone at this point,” Collinsworth said as he called out the Eagles over their decisions.

“Al, I’m going to take this one step further, as if I haven’t gone far enough yet. I’ll try not to get fired tonight. But if this had been the Dallas Cowboys that had won, could you imagine the conspiracy theories that would be going on between those two organizations?”

I stand with Collinsworth, except the part where he imagined a scenario in which the Cowboys won a big game. My imagination doesn’t extend that far.