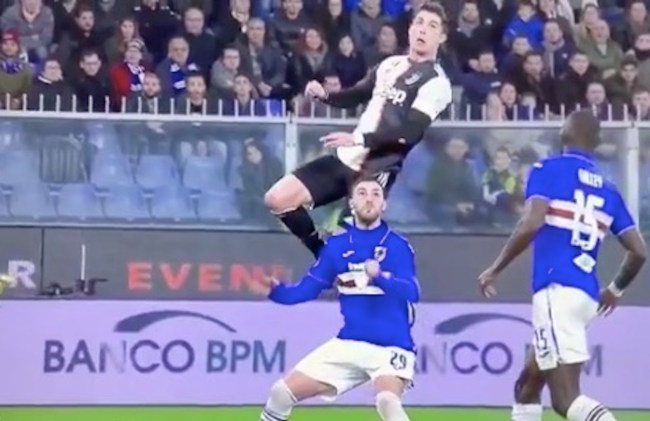 There are a lot of, uh, hot takes out there about Cristiano Ronaldo, to say the least.

From his incredible goalscoring ability to his android-like abs to his alleged shady sexual behavior, Ronaldo has been a hot button topic for almost two decades now.

But no matter how you feel about him personally or professionally, no one can deny that the man is an athlete of the highest order.

As the legend goes, when the then-33-year-old was transferred to Juventus, the team’s medical staff said he had the “physical capacity” of a 23-year-old. Similar to LeBron James, the dude just seems ageless, as his physical fitness as yet to show any signs of waning.

Now, at the ripe old of age of 34-years-old (which is old for sports, especially soccer, when your professional career begins in your teens), Ronaldo is still pulling off semi-regular mystifying feats of athleticism, the most recent of which being this outrageous Michael Jordan from-the-free-throw-line-esque dunk of a header against Sampdoria on Wednesday.

Ronaldo certainly doesn’t score as much as he used to — at least in club play — but he still remains capable of athletic feats that few others can pull off.